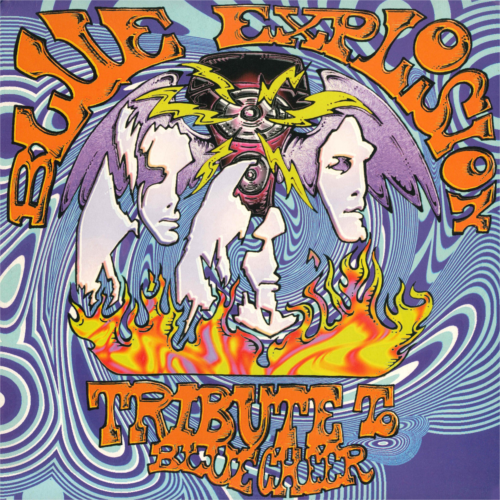 'Blue Explosion' is a fine tribute CD to one of the heaviest U.S. bands of all t

In an era that was known for loud, ear-piercing lead solos and basslines, that throbbed in your belly, BLUE CHEER had the unequivocal distinction of being the loudest Rock’n’Roll band in the world. Guiness Book of Records even introduced an according category … with Blue Cheer being the first ever title holder, to be followed only in later years by Grandfunk Railroad or Black Sabbath.Nlue Cheer are often credited as the very earliest pioneers of heavy metal and their version of "Summertime Blues" has been cited as the first heavy metal song.[7] According to Tim Hills in his book, The Many Lives of the Crystal Ballroom,[34] "Blue Cheer was the epitome of San Francisco psychedelia." Jim Morrison of The Doors characterized the group as "the single most powerful band I've ever seen" and Eric Clapton defined them as "…the originators of heavy metal".In 1967 the powertrio Blue Cheer had exploded onto the music scene with their debut album “Vincebus Eruptum”. This LP contained crazy psychedelic fuzz driven, heavy metal thunder riff versions of Mose Allison’S jazz song “Parchment Farm” and Eddie Cochran’s swinging Rock ‘n’Roll song “Summertime Blues” earning BLUE CHEER a solid niche in the later years as the founding band of what is now known as HEAVY METAL music.This was expressed by many great artists who should know, such as a.o. Eric Clapton, Jim Morrison, Jon Lord, Lemmy, Geddy Lee from Rush, Michael Anthony from Van Halen, Mark Farner, Goldy McJohn and Mars Bonfire (Steppenwolf’S keyboard player and guitarist, who wrote the song “Born to be Wild” thus introducing the term/tag HEAVY METAL for this kind of music), a.o..BLUE CHEER inspired and influenced even a great number of their contemporaries, such as GRANDFUNK, BLACK SABBATH, CREAM, JIMI HENDRIX EXPERIENCE, THE WHO, HAWKWIND, AEROSMITH, YARDBIRDS and many others to leave trodden paths of musical harmony.But not only their contemporaries, but also the next generations of bands such as MOTÖRHEAD, RUSH, VAN HALEN, KISS, SAINT VITUS, DANZIG, all the GRUNGE ACTS like NIRVANA, SOUNDGARDEN, MUDHONEY a.m.m. drew their inspiration from BLUE CHEER, even proto punk bands like BIOHAZARD or MUCKY PUP or EXCEL. Most especially BLUE CHEER inspired all the Stoner Rock bands such as KYUSS, NEBULA, QUEENS OF THE STONE AGE In 1989 the godfather of the grunge movement, producer genius Jack Endino from Seattle, produced BLUE CHEER’S phenomenal comeback original studio album “Highlights & Lowlives”, considering this the highlight of his life.In 1999, Blue Cheer finally and deservedly were the subject of a tribute album, Blue Explosion - A Tribute to Blue Cheer, featuring bands such as Pentagram 2 songs, Internal Void, Hogwash (UK) and Thumlock (AUS).Blue Explosion: A Tribute to Blue Cheer is a tribute album to Blue Cheer composed by Black Widow Records and released in 1999 on CD (Then the next year on 2LP). Of the sixteen tracks and fifteen bands spanning through Blue Cheer's first six studio albums, six of the bands reside from Italy and represent various eras of Italian psych or rock. Other notable guests include Argentinian band Los Natas in their early moniker Natas, Internal Void (USA - Maryland), Fireball Ministry (USA - California) and the Hasselvander/Liebling duo lineup of Pentagram (USA - NY) contributing two 2 2, Norrsken (SWE) , Garybaldi (IT) , Rise and Shine (GER), Wicked Minds (IT), STandarte (GER), Drag Pack (USA - New Jersey), Space Probe Taurus (SWE), Vortice Cremisi (IT), Ufomammut (IT).