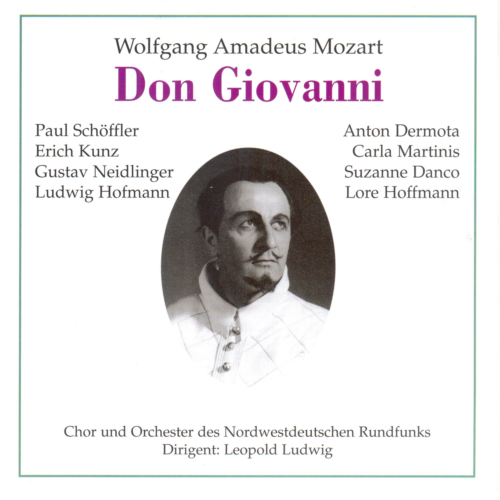 The radio recording of Don Giovanni of November 1951 features singers who for the most part were singing these roles at the time at Vienna’s Theater an der Wien, the makeshift home of the Vienna State Opera following the widespread destruction of the opera’s own house during the war. No other recording of this work offers the combination of Paul Schöffler and Erich Kunz. In November 1950, Boston’s Haydn Society recorded in Vienna the first long-play version of the opera with Hans Swarowsky conducting the Vienna Symphony. Because many of the singers who would have been best-suited to the roles were already under exclusive contracts to other labels, it was necessary to find replacements. Thus Mariano Stabile sang the role of Don Giovanni with Oskar Czerwenka as the Commendatore, Gertrude Grob-Prandl as Donna Anna, Herbert Handt as Don Ottavio, Alois Pernerstorfer as Leporello and Hedda Heusser as Zerlina. Only Hilde Konetzni as Donna Elvira and Alfred Poell as Masetto were cast in their usual roles. Rather than making a new recording, EMI initially decided to release the 1936 Glyndebourne recording of Don Giovanni under Fritz Busch on long-playing records. In 1955 two labels recorded the opera separately in Vienna: Philips with the Vienna Symphony under Rudolf Moralt with George London, Ludwig Weber, Hilde Zadek, Léopold Simoneau, Sena Jurinac, Walter Berry, Eberhard Waechter and Graziella Sciutti; and Decca with the Vienna Philharmonic under Josef Krips with Cesare Siepi, Kurt Böhme, Suzanne Danco, Anton Dermota, Lisa della Casa, Fernando Corena, Walter Berry and Hilde Güden. The Philips recording most closely matches the cast that was usual in Vienna at the time. The Decca recording uses two Italian singers who were not to sing these roles on stage in Vienna until much later: Cesare Siepi sang his first Don Giovanni in the Autrian capital on 21 April 1963, while Fernando Corena appeared there as Leporello for the first time on 27 February 1963, One period recording appears to have been lost forever. A note in the archive of the Vienna Philharmonic indicates that the orchestra recorded a complete Don Giovanni under the baton of Rudolf Moralt on 6 and 7 September 1944 for the Reichsrundfunk, the radio corporation of the Third Reich. The cast consisted of Paul Schöffler, Herbert Alsen, Anny Konetzni, Anton Dermota, Hilde Konetzni, Erich Kunz, Tomislav Neralic and Elisabeth Rutgers. The tapes were immediately shipped to Berlin but there is no evidence that they ever arrived. In any case they are no longer to be found in either Vienna or Berlin