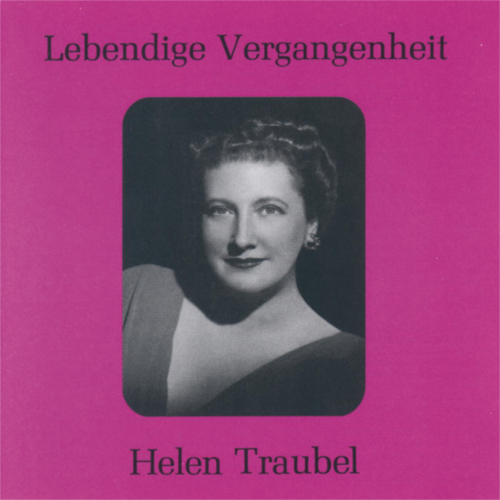 "Isolde from St. Louis", "First Lady of Valhalla", "America's answer to Kirsten Flagstad" - those were only some of the flowery attributes which Helen Traubel was accorded by the American Press. Already her debut at the Metropolitan Opera had caused quite a stir in the papers, for she was the first US born-bred-and-trained singer to triumph in Wagner roles. Her retirement from the MET fourteen years later was no less a sensation, not least because her farewell was by no means voluntary. On the contrary - she was forced off the stage by the newly appointed General Manager, Rudolf Bing. Even more commotion was caused by the reason given for her dismissal. May an Isolde, Brünnhilde and Kundry of the MET concurrently make an appearance as a nightclub singer? Are Jazz and Musicals compatible with the dignity of an opera house? Bing's reply was an unequivocal "No"! Although the press was unanimously on Traubel's side and considerable ire was triggered by Bing's "European arrogance", her contract with the MET was not renewed. She gave her last performance at the MET on March 21, 1953, singing Isolde. Soon her name was splashed over the posters of the show-programmes of New York's "Copacabana Club", the "Chez Paree" in Chicago, the "Sahara" hotel in Las Vegas and the "Clover Club" in Miarni. At the same time she appeared on TV, opposite Grouchö Marx, Red Skelton and Jerry Lewis, played a cameo role in a Hollywood film ("Deep in my heart" staring Jose Ferrer and Merle Oberon) and even retumed to the stage, albeit not in opera but rather a musical: in New York's "Shubert Theater" she sang the role of Fauna in Rogers and Hammerstein's unsuccessful revue "Pipe Dream". Helen Traubel was bom on June 20, 1899 in St. Louis of German descent. Her father's name was Otto Ferdinand, her mother's Clara. Already in early adolescence her desire to become a singer was evident, inspired by her mother, who was a competent concert singer. At the age of 13 Helen started vocal, tuition. A prematurely early start of her career was pre-empted by her sense of perfectionism. More than 10 years of intensive studies elapsed before she plucked up sufficient courage to make her official debut. Aged 27 she appeared as a guest soloist together with the St. Louis Symphony Orchestra. A little later she sang Isolde's "Liebestod" with the same orchestra in New York's Lewisohn stadium. She was immediately offered a contract with the Metropolitan Opera but as she did not feel well prepared enough she returned to St. Louis to continue her studies, occasionally singing in churches, or giving lieder recitals. It was not before she was 35 that her career really took wing. Walter Damrosch, who conducted the "German Singers Festival" in St. Louis, was so impressed by her vocal ability that he offered her a role in the world premiere performance of bis opera "The Man without a Country". In her witty and ironic autobiography "St. Louis Woman", she recalls that not only her voice was huge. The only thing I remember is that the tenor was a lot smaller and slimmer than I. In one scene I bad to walk across a footbridge, arms stretched out wide; bad I slipped and fallen onto the poor fellow, the "man without a country" would have turned into a "country without a man". After Helen Traubel bad sung the four performances allotted to Damrosch' s unsuccessful opera her MET career seemed to be over. Two years elapsed before she again sang in New York . On October 8, 1939 she gave a lieder and aria recital in the Town Hall, to great acclaim. Three months later she celebrated her actual debut at the MET, singing Sieglinde opposite Kirsten Flagstad and Lauritz Melchior. Prior to that there bad been an almighty - and public - dispute with the MET management which bad scheduled her to sing Venus in "Tannhäuser". Traubel insisted on being granted the much more attractive role of Wotan's daughter and eventually got her way - vehemently supported by the press. During the first two seasons she bad to share the Wagner heroines with Kirsten Flagstad. In 1941 Flagstad withdrew to Norway, leaving the field to her rival. Helen Traubel subsequently sang all the great Wagner roles, viz: the three Brünnhildes, Isolde, Elisabeth and Eisa, eventually also Kundry. The one role she forswore was Senta as she felt sure she would look absurd in a dirndl-like Senta costume. Helen Traubel appeared 176 times at the MET, 168 times in Wagner operas. Also as a guest artist in San Francisco, Chicago, Philadelphia or Buenos Aires she was always asked to sing Wagner roles. Helen Traubel was also a successful novelist. In 1952 she published her first thriller: "Murder at the Metropolitan". The book sold extremely well, not least because the readers thought - erroneously­ that it was a roman clef about the MET under Rudolf Bing. Helen Traubel spent the last years of her life in Santa Monica, Califomia, where she died on July 28, 1972.'