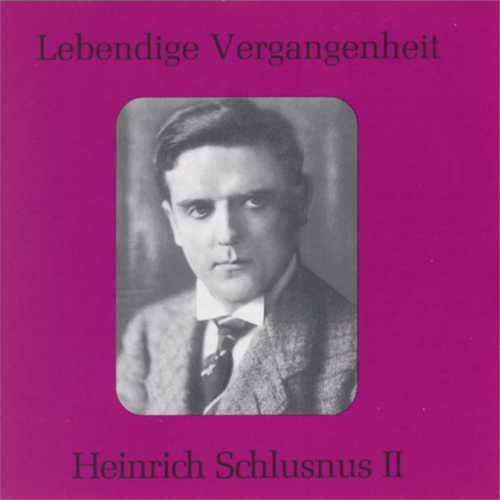 Heinrich Schlusnus was born on August 6. 1888 in Braubach am Rhein. He came from simple and modest circumstances and entered the German postal service after finishing his secondary education. After a short period of voice instruction he appeared in Frankfurt for the first time on the concert stage on June 14. 1912 as "Postal Assistant Schlusnus". The encounter with Arthur von Weinberg, a patron of the arts in Frankfurt, was of considerable significance for his development. In the welcoming atmosphere of the house of his patron and sponsor, Schlusnus, with the naturalness of his open personality, stepped beyond the bounds of his previous environment and was introduced to a larger world. For all of this Schlusnus never denied his origins and remained convincingly simple and uncompicated. In World War I he was wounded as a one-year volunteer soldier and declared disabled. He made his debut, still walking with a cane, as the Heerrufer in "Lohengrin" at the Hamburg Opera in 1915, soon after transferring to Nürnberg. Here began his years of apprenticeship under the guidance of Robert Heger and Clemens Krauss which led him steadily to mastery of his art and gave him confidence on stage. At that time Schlusnus excelled as a Verdi interpreter. He sang his first Rigoletto on April 22, 1917 in Nürnberg. He was brought to Wiesbaden by the Berlin manager Count Hülsen-Haeseler for guest performances as Valentin in "Faust" and also to Berlin for Luna in "Trovatore". This led to an engagement at the Berlin Hofoper. As Wolfram in "Tannhäuser" Schlusnus stood for the first time as a member of the ensemble on this legendary stage on September 2, 1917. He quickly became one of leading members of the theatre, which he belonged to until its destruction on February 3, 1945. His Rigoletto, Luna, Germont, Posa, Montfort and Renato set standards for following generations of singers. The glittering world of opera, however, provided only the frame of this remarkable artistic life whose most luminous aspect radiated from the world of song. In April 1918 Heinrich Schlusnus stood för the first time on the platform of the Blüthnersaal in the Linkstraße. More than 2000 recitals were to follow, in which the already legendary Schlusnus style was to develop - that style which has often been imitated but seldom realized. Contemporary intellectualism has proven insufficient, as Schlusnus once remarked to the composer Mark Lothar, "to capture the essential qualities which a song must have, namely a natural simplicity." Already in 1919 he began in Amsterdam and Oslo a series of numerous foreign engagements which took him to Barcelona in 1922 and later to England, France, Austria, the Balkans and Turkey. Mention must also be made of his annual recitals in Switzerland and bis tour to South Africa in 1949. Heinrich Schlusnus sang for the first time in the United States of America in 1927. Five other tours and an appearance as Wolfram in Chicago followed until 1933. In this year he also sang Amfortas in Wagner's "Parsifal" at the Bayreuth Festival. After the second world war Schlusnus sang Germont in several performances of Verdi's "Traviata" in December 1948 in Frankfurt and donated his fee to the reconstruction funds for the new opera house. Once again he returned to Berlin, the city to which he owed bis rise to fame. After two concerts in the Titaniapalast (seating 1800 people) he appeared on the Berlin stage in June 1948 once more in his favorite role, Rigoletto. His last stage appearances took place in Coblenz in January 1951 as Germont in two benefit performances for bis native town Braubach. He gave his last recital in Hannover in the middle of April 1951. His life, which was blessed with good fortune and beauty, was brought to a quick end by incurable heart disease. On the evening before his death he sang, standing at he window of his house in Frankfurt, Schubert's song "Im Abend­ rot" with bis voice fully intact. lt was tobe his last message to a world which he loved with all his heart, this heart which ceased to best on June 18, 1952. A great artist, who regarded art with humility and responsibility and warm, noble human being bad reached the end of bis life. A voice of world importance fell silent.