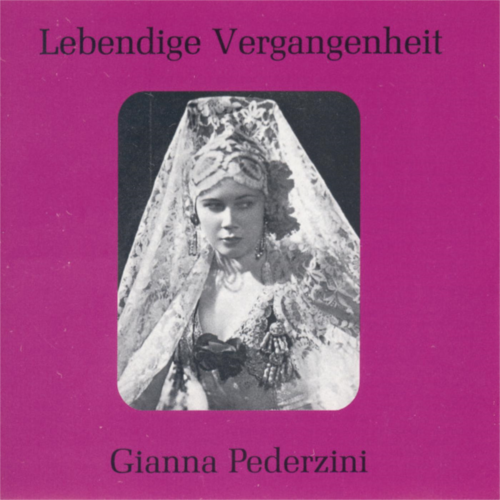 Gianna Pederzini was born near Trento on February 10th 1900. As a very young girl she went to Naples to become the last master student of the great Fernando De Lucia. When he died in 1925 Pederzini had not been able to finish her studies with him. In 1923 ignoring the warning of her teacher, who had always advised her not to accept any premature engagements, she made her debut as Preziosilla in "La forza del destino" at the Teatro Mercadante in Naples. This was followed by several troublesome years in the ltalian province where she accepted even small roles like the Musico in "Manon Lescaut". She celebrated her first big successes in 1929/30 and from there on was engaged at all important Italian opera houses in major roles. Although Pederzini had debuted at London's Covent Garden Opera already in 1931, again as Preziosilla (with Ponselle, Pertile, Franci and Pasero) and as Maddalena in "Rigoletto" (with Gigli, Borgioli and Franci), she was not heard too often outside of ltaly. Her Cherubino in Rome in 1932 was very well acclaimed and she repeated this success later in the same role at "La Scala". Very soon she became the "Scala's" leading interpreter of the lighter roles in the mezzo-soprano repertoire, especially as Carmen, Mignon, Charlotte in "Werther" (with Schipa), Maddalena and Preziosilla. Her secure upper register and the bright sound of her voice enabled her to sing also roles from the soprano-repertoire like Sanfüzza, Fedora, Rosa Mamai in "L'Arlesiana" and Katjuscha in Alfano's "Risurrezione". She appeared regularly at the Teatro Colon, in Paris and in Berlin, but, surprisingly, bad never returned to London and never sang in North-America. Americans only got to know her through her appearances at the festivals in Florence and Verona. After Conchita Supervia's early death Pederzini was the first mezzo-soprano who took charge of the Rossini repertoire and in 1937 she was a celebrated Cenerentola at "La Scala" where she also interpreted "L'Italiana in Algeri". For an Italian singer her career was a rather long one and in 1957 she still sang in the world premiere of Poulenc's "Les Dialogues des Carmelites". Gianna Pederzini was for over thirty years one of ltaly's most celebrated artists and one wonders why neither the Metropolitan nor the Chicago Opera ever bothered to call upon her. Hers was a light mezzo soprano, similar to Supervia's voice, but without the latter's strong ehest register. She was what the French call a Galli-Marie. Her domain were parts like Carmen, Mignon, Charlotte, Cherubino and later on Rossini operas. The soprano roles in her repertory suited her very well and she mastered them without straining her organ. Pederzini never made the mistake to risk too much and always sang within her range. In her first years she also approached some contralto roles: Amneris, Azucena and Ulrica which even exist on record. Very soon Pederzini noticed that they were too heavy for her voice and after 1930 she hardly sang them anymore. Still, she kept the part of Leonora in "La favorita" because the tessitura lies a little higher than usual. Gianna Pederzini 's voice had a rich variety of colors and light and shade and was always finely poised. One can feel from her recordings what a great effect she must have made on stage. Pederzini was a very attractive woman and truly bad a "physique de röle", even for a Cherubino. lt makes one wonder why she had never undertaken roles like Octavian and the composer in "Ariadne auf Naxos". As Hänsel, however, she succeeded the great Supervia. In a film version of Verdi's "Trovatore" after the war Pederzini was the only one who both sang and acted her role. Already in 1930 she made her first records for "La voce del padrone" which had been published on the minor green label and are almost impossible to find outside of Italy. They are worth the trouble of tracing them: Pederzini recorded "trovatore", "Gioconda", "Carmen", "Faust" (Siebel), "Mignon", "hallo in maschera", "Manon Lescaut" (the Musico's madrigal) and "La forza del destino". They also include a wonderful recording of Tosti's "Dopo" which clearly shows the school of De Lucia. The water-aria from "Mignon" is also considered one of her best recordings. Through her partnership with Renato Zanelli (final of "Carmen") and Benvenuto Franci ("Favorita" duet) her name was also found on the exclusive red label which, as a soloist, Pederzini obtained only years later. Apart from two records for Fono Roma (1934) it took ten years until she again recorded for "La voce del padrone" and Cetra. It is regrettable that neither before nor during the war Pederzini had been cast in a complete opera recording; only in 1952 she took part in a recording of "L'Arlesiana" where her partners were Emma Tegani, Juan Oncina and Aldo Protti. It was to be her last one. Gianna Pederzini bade farewell to the stage in 1961 and spent the rest of her life teaching and advising young singers in Rome where she died on March 12tll 1988.