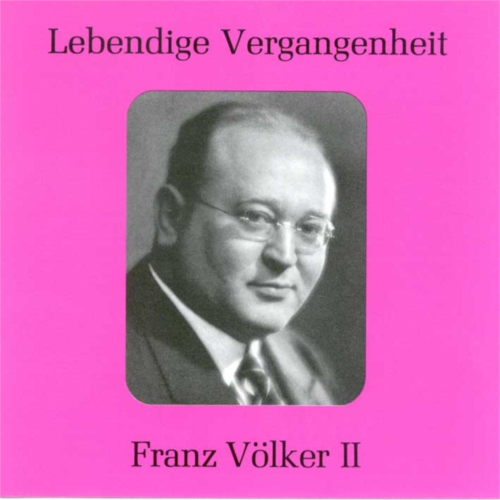 Franz Völker is one of the best known and most outstanding singers of German origin. He was born in Neu-Isenburg near Frankfurt am Main and his talent for singing became evident while he was still a child. At the age of only ten he sang a lengthy solo in a public concert. In the years that followed he was a valued member of a number of singing societies, in which he was frequently entrusted with solo parts. After graduating from high school in Offenbach, Völker went to work in a bank. He did not stay there long, for he was conscripted for mitlitary service. In the First World War he was in the artillery, but he also conducted a male chorus made up of soldiers who were musically gifted. One of Völker's superiors discovered his vocal talent and arranged an audition for him at the Grand-Duca! Theatre in Darmstadt. Völker's singing aroused such great interest that he was offered a free course of vocal training by the theatre's management. The end of the war and the uncertainties of the post-war era put an end to that project, and Völker returned to his secure pre-war occupation. For several years he remained a bank employee, gradually rising to the post of teller in the Frankfurt Disconto Gesellschaft. In his freetime he went on singing in choruses. The turning point in his career came in 1925, when Frankfurt Radioheld a contest for amateur singers, which Völker entered. The contest was decided by the response from listeners, and Völker, who san the aria "Questa o quella" from Verdi's "Rigoletto," got the highest number of votes. This brought Völker a number of offers. Conductors and theatre directors began to show an interest, and finally Clemens Krauss, then the director of the Frankfurter Opera House, took the young singer under his wing. lt was not until this point that Völker decided on a singing career. After studying for a year and a half with Professor Welling, he was offered a five-year contract at the Frankfurt Opera. On November 2, 1926, Völkermade his debut in the role of Florestan. This was the start of a career which quickly made him one of Germany's leading tenors. From 1931 to 1935 - again with Clemens Krauss as director - he was a member of the Vienna State Opera; he sang at the Berlin State Opera from 1935 to 1944, and at the Munich State Opera from 1945 to 1952. In his 26 years as a singer, Franz Völker acquired an unusually large repertoire of operatic roles. In the foreground were those of a dramatic and heroic character, especially the main Wagner parts. Völker was one of the finest Wagner interpreters ever, and his performance of Lohengrin in particular became world-famous. Between 1933 and 1942 he demonstrated his qualities as a Wagner singer at the Bayreuth Festival. Apart from Lohengrin, his best known Wagner roles included Erik, Siegmund and Stotzing. From 1931 to 1934 Völker sang at the Salzburg Festival, showing, as Ferrando in "Cosi fan tutte," that he was also an excellent Mozart singer. In Salzburg he was also heard as Florestan and as Menelaus in "Die ägyptische Helena" by Richard Strauss. Of the many roles Völker sang in the course of his career, the following should be singled out: Max, Pedro, the Emperor ("Frau ohne Schatten"), Radames, Don Carlo, Otello, Don Jose, Eleazar, Canio, Hermann ("Pique Dame"). He also had great success as a song recitalist, andin operetta he was a favourite with audiences. After leaving the stage, Völkerheld a professorship at the College of Music in Stuttgart and then worked as a singing teacher in his native Frankfurt. As a recording artist, Völker attained a popularity such as few singers before him had achieved. His vocal art is preserved as an opera singer and song recitalist, and his recordings of light music can hardly be counted. Franz Völker's voice had a noble, well-focused quality, highly musical control and an exemplarily cultivated legato.