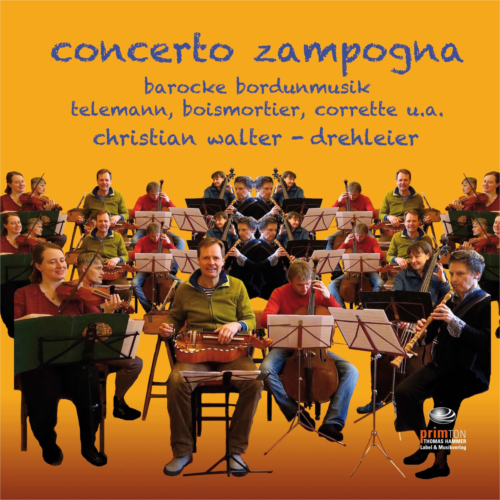 The hurdy-gurdy rose to a singular popularity in the 18th Century French Court, where glamorizing shepherds and peasants’ lifestyles was en vogue with the aristocracy. Not just the clothing and scenery, but also the instruments of the shepherd class were brought into the fine salons. Along with the musette, a smaller version of the bagpipes, the hurdy-gurdy was elevated to the status of a fashionable instrument of the court. The hurdy-gurdy now garnered the attention of various composers, who wrote etudes, solo and orchestral pieces for the instrument. With this cd, we have recorded a selection of these pieces, highlighting various roles of the instrument: Joseph Bodin de Boismortier's "Concerto Zampogna", Michel Corrette's concertos and also pieces by Nicolas Chédeville, Jacques-Christophe Naudot and Georg Philipp Telemann.With his baroque mini-orchestra, Christian Walter creates a unique and lively sound, elevating the hurdy-gurdy to a place of prominence. Chamber music gems in imaginative arrangements guarantee that the recording remains engaging throughout.