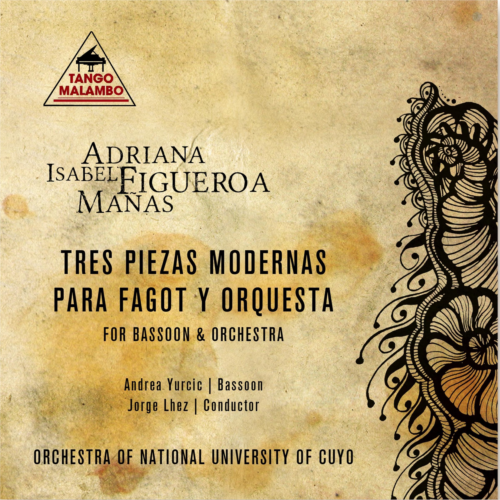 New and fresh jazzy-latino music from Argentina for bassoon and orchestra.

A new work of Latin contemporary music for bassoon and orchestra by the argentinian-uruguayan composer and prize winner ADRIANA ISABEL FIGUEROA MAÑAS, showing her new vision of classical orchestra’s treatment, mixed with Latin American and Jazz elements. She is member of FADEC (Argentinian Foundation of Women Composers), IAWM (International Alliance Women in Music) and has won a lot of prizes in her country and abroad. Her works have perfomances over the world and they are well known in many countries. Besides symphonic and chamber music, she composes music for films and multimedia. She graduated in 1997 at the University of Cuyo in Argentina and holds a Master degree in Latin American Music from the same university. She already went to contemporary orchestration techniques matter, is a saxophonist as well, and has given concerts in several jazz festivals. ANDREA YURCIC: Born in Mendoza, Argentina, in 1969. In 2002, she passed a competitive examination for the post of Principal Bassoon at the Symphony Orchestra of the National University of Cuyo and she is a Tenured Professor at the Chair of Bassoon at the School of Arts and Design, in her home town. As a recipient of a scholarship of the German Academic Exchange Service (aka DAAD), she obtained an Artistic Master in Bassoon at Karlsruhe’s University of Music in Germany, in the chair of Professors Günter Pfitzenmaier and Eberhard Steinbrecher. In Europe, she furthered her studies with renowned bassoonists, such as Sergio Azzolini, Albrecht Holder, and Dag Jensen. She has a Bachelor degree in Bassoon by the School of Music of the School of Arts and Design at the National University of Cuyo, where she began her studies with Maestri Roque Russo and Sergio Ruetsch. Moreover, she placed as soloist bassoonist in the Bachakademie Stuttgart conducted by Helmut Rilling, at the Jugendkammerphilarmonie Badenwürtenberg, at the Nashville Symphony Orchestra as an exchange program, as well as in several orchestras in Europe and Argentina, going to several concert tours. JORGE LHEZ: An outstanding Latin American orchestral and choral conductor, he is the music director of the Symphony Orchestra of Salta in his native Argentina. Mr. Lhez has guest conducted the principal orchestras of Argentina, Brazil, Chile, and Colombia, including the National Symphony Orchestra of Argentina, the Symphony Orchestra of Concepción (Chile), and the Symphony Orchestra of the ITU Festival in Brazil. In Italy, he conducted the Symphony Orchestra of Pescara. Among the distinguished international soloists he has accompanied are violinist Erzhan Kulibaev (specialprize winner of the 2011 Wieniawski Competition), bassoonist Sophie Dartigalongue from the Berlin Philharmonic, and clarinetist Ishay Lantner from the Symphonieorchester Köln. Mr. Lhez studied piano in Buenos Aires with Aldo Antognazzi, and harmony, composition, and analysis with Sergio Hualpa. His conducting teachers include Pedro Ignacio Calderón in Argentina, Eleazar de Carvalho in Brazil, and Harold Fabermann and Donald Portnoy in the United States.THE ORCHESTRA OF THE NATIONALITY UNIVERSITY OF CUYO, was created in 1948 and has been giving special prominence to Mendoza's cultural life. Very important conductors were artistic directors of this organization, like Julio Perceval, Olgerts Bistevins, Jean Constantinesco, Alejandro Derevitzky, Achilles Romani, Juan Carlos Zorzi, Julio Malaval, Jorge Fontenla, Armando Krieger, Guillermo Scarabino, David del Pino Klinge, Ligia Amadio and David Handel. The current artistic director is Rodolfo Saglimbeni (Venezuela). In 2009 he was selected to receive the award KONEX dedicated to distinguish the most important personalities of Classical Music Argentina in the last decade. 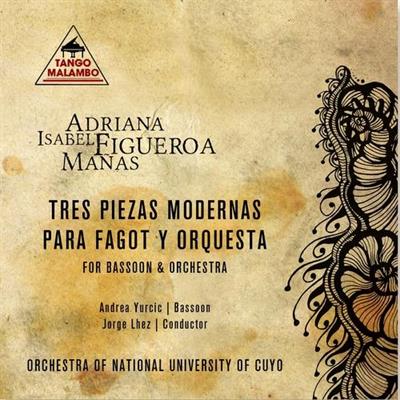