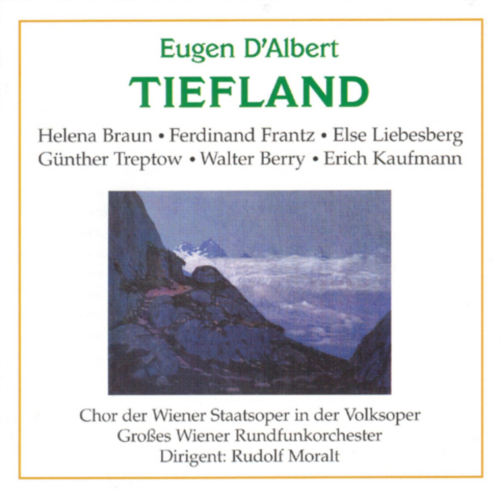 In the Pyrenees Mountains, high above the Lowland plains, the shepherd boy Pedro tends the flocks of his master Sebastiano and dreams of the ideal woman he has not yet encountered. As Pedro muses, the wealthy and brutal Sebastiano appears with Marta, whom he has made his helpless slave. Sebastiano is planning a rich marriage for himself, but he intends to force Pedro into a marriage with Marta and then go on enjoying Marta`s favours as before. Pedro, seeing in Marta the girl of whom he has dreamed, agrees and accompanies Sebastiano and Marta to the Catalonian Lowland village where Sebastiano will make him his miller. Little Nuri, one of Sebastiano’s servants, unwittingly gives away to the townspeople the master’s evil plan, and Marta and Pedro are mocked as they come down from the mountains for the wedding. Marta implores Sebastiano not to force her into this marriage with Pedro, but Sebastiano's only reply is that he will visit Marta on her bridal night. After the wedding Pedro’s honest love for Marta brings home to the bride the shamefulness of her situation. Pedro even gives Marta all the wealth he possesses - the silver dollar he won for killing a wolf. Marta ignores the light in her bedroom, the signal than Sebastiano is awaiting her, and remains in the mill with her husband. Marta`s uneasiness and the light in her bedroom have aroused Pedro’s suspicions and he goes to the village, returning with the knowledge of Marta’s past and her relationship with another, although he does not know the man’s identity. Marta has fallen deeply in love with Pedro but she believes that she has lost him now that he knows the truth, and so she taunts him in the hope that he will kill her. Pedro draws his dagger but realizes suddenly that in spite of everything he still he will kill her. Pedro draws his dagger but realizes suddenly that in spite of everything he still loves Marta. When the girl admits her love for Pedro to him, Pedro begs her to return with him to the mountains where the air is clean and pure. Sebastiano bursts brutally into this scene and demands that Marta dance for him. Marta denounces Sebastiano to Pedro as her betrayer, but when Pedro attacks his employer he is hurled from the house. Now Tommaso, a village elder, brings Sebastiano the news that the rich widow Sebastiano had intended to marry will have nothing to do with him. This so angers Sebastiano that he pursues Marta. Her cries for help bring Pedro back. Pedro leaps on Sebastiano and strangles him with his bare hands, just as he strangled the wolf in the mountains. Hand in hand, Marta and Pedro bid farewell to the Lowlands and leave together for the mountains and happiness.