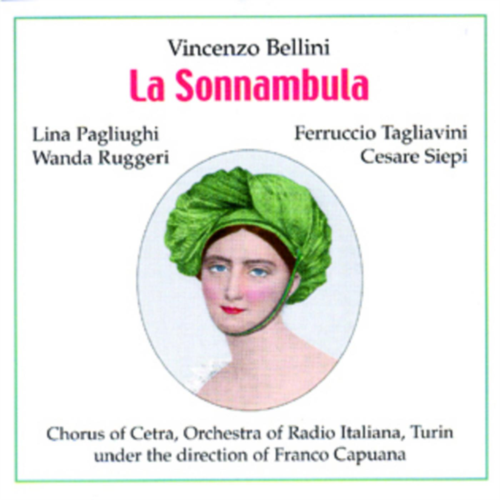 The story of “la Sonnambula” takes place against a pastoral setting among the Swiss Alps. Act One. The village has gathered to celebrate the betrothal of the lovely Amina to Elvino, a rich young landowner. Only Lisa, the innkeeper, is not content; she had hoped to marry Elvino herself. At the close of the simple ceremony, a stranger arrives, bound for the castle. The villagers persuade him to stay the night at the inn. As night falls, all prepare to leave, explaining to Rodolfo, the stranger, that there is a weird apparition that haunts the place after dark. He scoffs at their superstition, then goes to the inn with Lisa. Elvino, after a moment’s jealousy caused by Rodolfo’s compliments to Amina, bids his beloved good-night. The scene changes to Rodolfo’s room. Lisa enters. The stranger’s secret has been discovered: he is the Count, absent from the locality since his youth. There is a noise at the window, which Rodolfo opens as Lisa, afraid to be discovered, hides. Amina comes in, walking in her sleep. This, the Count realizes, is the town’s apparition. Lisa, unseen, makes the most of this opportunity to compromise her rival. She runs off to find Elvino. He comes back as the villagers, eager to pay their respects to the Count, crowd into the room. He comes back as the villagers, eager to pay their respects to the Count, crowd into the room. Rodolfo has left but Amina is found, asleep on the couch. Without waiting for an explanation, Elvino breaks off the engagement. The villagers are stunned by what seems to point to Amina’s guilt. Act Two. In a brief first scene, the villagers go to the castle to ask the Count for an explanation. Elvino, still in despair at Amina’s supposed betrayal, refuses to hear the Count’s assurances that the girl is innocent. Later, Elvino is about to marry Lisa. The Count comes in and insists that Amina is blameless, explaining the phenomenon of somnambulism. But again Elvino refuses the explanation. He and Lisa are on their way to the church when Teresa, Amina’s mother, reveals Lisa’s perfidy and produces a handkerchief that Lisa herself had left in the Count’s room on the fateful night. Deceived again, Elvino doesn’t know what to believe. But at this moment, Amina is seen, walking in her sleep along the edge of the roof over the water-wheel of the mill. All finally understand, and when she is safely in their midst, Elvino tenderly awakens her and asks her forgiveness. They are reconciled and everything ends happily.