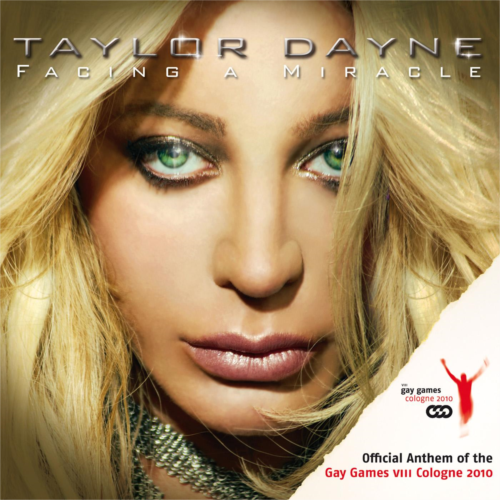 Taylor Dayne stands out as one of music's most dynamic artists. Her unique vocal style has earned her numerous best-selling gold and platinum albums which produced seventeen Top 20 singles, among them number 1 hits such as "Tell It To My Heart", "Love Will Lead You Back" or "Prove Your Love To Me". Over the course of her career, she has sold more than 75 million albums and singles worldwide, garnered three GRAMMY nominations and appeared in many film, television and stage roles. In the past few years it became a little quiet as the single mother took care of raising her kids Levi and Astaria before she got back on stage in 2008 with her album "Satisfied" and immediately positioned its single "Beautiful" at Billboard's number 1. The organizers of the Gay Games VIII. Cologne 2010 were especially enthusiastic when Taylor Dayne spontaneously agreed to record the Official Athem of the mega event. Before that a song contest has been advertised in order to find the right song. An independent jury of music experts, among them two music programmers of WDR, has picked out "Facing A Miracle" of a great number of submitted songs. Its outstanding musical hook and hope-spending lyrics paved the way for "Facing A Miracle" to become the Official Anthem of the Gay Games VIII. Cologne 2010. The Swedish producers Emil Hellman and Peter Hägeras created a splendid arrangement suitable for Taylor Dayne's big voice. Peter Wolf's "Wild West Studios" in California were chosen to record Taylor's lead vocals and it is not surprising the high-profile singer pulled off a unique masterpiece. Due to the special occasion in addition to the original radio edit various versions of "Facing A Miracle" were made such as the lavishly orchestrated "Pop-Up Symphonic Anthem" or the "Electro Groove African Anthem feat. Il Quinto" with African percussions and choirs as well as driving "SoundFactory" club remixes. Other than most sports championships everybody can take part in the Gay Games. No matter what power, age, sexual orientation or physical capabilities everyone can compete with each other in 35 disciplines. In 1982 the first Gay Games were held in San Francisco and since then take place every four years. On July 31st Taylor Dayne will perform "Facing A Miracle" live in Cologne at the official Opening Ceremony of the Gay Games VIII. Cologne 2010 with a spectacular show including 20 dancers.