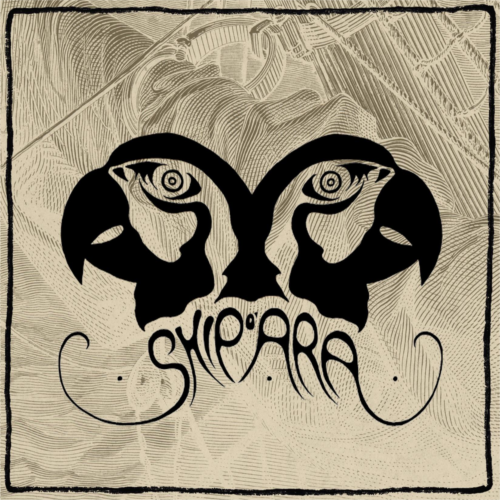 SHIP OF ARA is the duo of Groucho Kangaroo and Stefan Schlensag. Groucho’s work with the COSMIC KANGAROOS and Stefan’s leading part in THE HIPSTERS are well known realities to all those 80’s neo-garage and psychedelic freaks out there. But now they have ventured out to present their folky sides – which won’t mean that there’s no noise involved… Stefan and Groucho share a fascination for 60’s folk and blues recordings on Vanguard, Elektra, Prestige and the like. So it’s kinda natural to them to carry this tradition into the next century, millennium, whatever… The idea is to create a powerful sound on the basis of acoustic instruments. All songs were written for acoustic guitar and voice, but the arrangements add electric lead guitars, percussion and sometimes a good dose of feedback. Woven into the elements of electric folk are some psych features. Tremolo effects and droning bass lines make the songs hover around in the ether. The SHIP OF ARA is made for water and space alike – you decide where your ears want to land… Groucho Kangaroo: vocals, acoustic guitar, electric slide guitar, darabuka. Stefan Schlensag: vocals, acoustic guitar, electric guitar, banjo, accordeon, harmonica. "...an album of mostly mid-Atlantic acoustic “neo-folk” music by a couple of characters from the Ruhr-Valley garage and psychedelic scene...this is a decent showing and one that could reward investigation." Terrascope, April 2010 www.shipofara.com