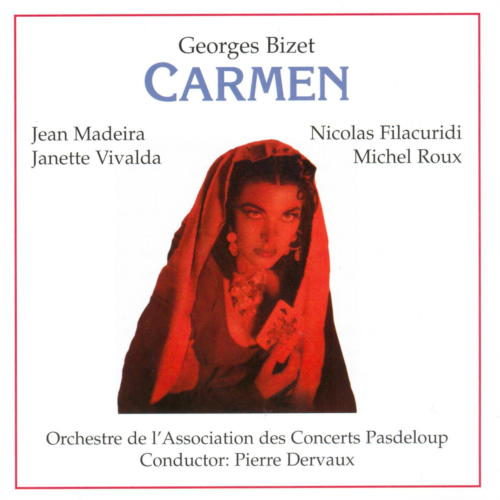 When Jean Madeira first sang Carmen at the Metropolitan Opera House in 1956, a role she thenceforth sang no less than 200 times at various opera houses all over the world, Time Magazine reported that “Her big voice had a dark, anthracite sheen, always firm and thrilling… Jean Madeira achieved a long-sought objevtive to arrive at the top of the operatic heap in her own country.” Following this was a sensational debut in Vienna with the Vienna State Oprea. She was known as the “Liebling” (“darling”) of the Viennese public, and indeed, Vienna was her “home away from home.” A coal miner’s daughter, Illinois-born Jean Madeira (née Browning, she was part American-Indian) first studied the piano, advancing far enough to play Beethoven’s C Minor Concerto at the age of 12 with the St. Louis Symphony Orchestra. On a teacher’s advice, however, she took up the study of singing, received a scholarship for the Juilliard School of Music in New York, and shortly after her graduation became a member of the Metropolitan Opera House. Following her Metropolitan debut in the fall of 1954 she went to Stockholm, Sweden. A Swedish critic commenting on her performance of Delilah, in “Samson and Delilah”, exclaimed “How can you write a review about a phenomenon of nature”. What ensued her appearances in Sweden was a rapid rise to international fame achieved through engagements at La Scala, (Milan), Teatro Colón (Buenos Aires), Royal Opera House (Covent Garden), Vienna State Opera, San Carlo (Naples), as well as at the Metropolitan Opera, Chicago Lyric Opera, Dallas Opera, and the San Francisco opera in the United States; and in the Salzburg and Bayreuth Festivals. In 1961 she sang Carmen in Stuttgart for the European Television and for the B.B.C. in London; in 1962 she made her debut in Tel-Aviv with the Israel national Opera, singing Carmen and Delilah. In that same year she sang the part of Pyrene in the first American performance of Falla’s “L’Atlantida”, during the inauguration festivities of Lincoln Center’s Philharmonic Hall in New York. Her interpretation of Carmen, one of the most difficult roles in the entire repertoire, is widely hailed as outstanding: “When it comes to singing she is in the prima donna class. When it comes to hailed as outstanding: “When it comes to acting she has it all over the others” was the opinion of Paul Henry Lang (New York Herald Tribune). Claudia Cassidy (Chicago Tribune) remarked that “Miss madeira has everything it takes for the role of Camren”; and from the Buenos Aires Herald came “It was a beautifully sung and acted performance, and a more intelligent portrayal of Carmen you will wait a long time to see or hear”. After a performance at the 1957 Aix-en-Provence Festival, the enthusiastic review in Le Monde read, in part, as follows: “Admirable from the start, the voice was not that of a singer only, but of a personality… We have for a long time waited without much hope for a Carmen; here she is. At Aix, at long last, I found again and recognized again Carmen…” Jean madeira died in Rhode Island on July 16th 1972