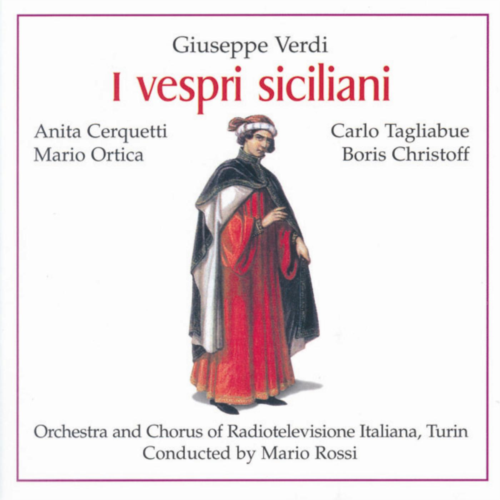 The “Sicilian Vespers” is the name by which history remembers the massacre of some 2000 occupying French by Sicilians at Palermo on 30 March 1282. On that day, outside the Church of Santo Spirito, where people were making their way to Vespers, a Frenchman molested a passing Sicilian woman, pretending to search her. She clutched at her husband who cried “Death to the French”. From all sides the cry was taken up as the bell tolled for Vespers. Verdi’s 19th opera “I Vespri Siciliani” or rather “Les Vespres Sicilliennes” was an attempt to combine the Meyerbeer style with his own warmer, more generous musical impulses; to use the immense resources of the Paris Opera for a large, exciting opera. As early as 1850 the Opéra had approached him for a new work (Don Carlos being one of the subjects proposed). In 1852 the contract was drawn up: Scribe was to be the librettist and Verdi could choose the cast. Scribe began by submitting two scenarios which Meyerbeer had previously refused. Verdi objected. He wanted “grandiose, impassioned and original subject”; he agreed with Scribe that at the Opéra one needed” scenes with women, ballets de luxe, etc…” and he wanted something that would have spectacular production effects. In October 1883 Verdi left for Paris. Scribe offered him “Le Duc d’Albe”, a libretto written for Donizetti which the latter had not been able to set completely due to his illness and Verdi agreed to use it – providing that the title was changed, the setting shifted to a “less chilly clime than the Low Countries, a warm and musical clime” (he proposed Naples, but Scribe thought that would be too close to “La Muette de Portici”) and that a fifth act be added to make it a piece on the “Huguenots” or “Prophète” scale. The result is not a drama of characters who come to life in song but a structure involving large ensembles, elaborate spectacle, local colour, intricate and novel orchestral effects and virtuoso singers.