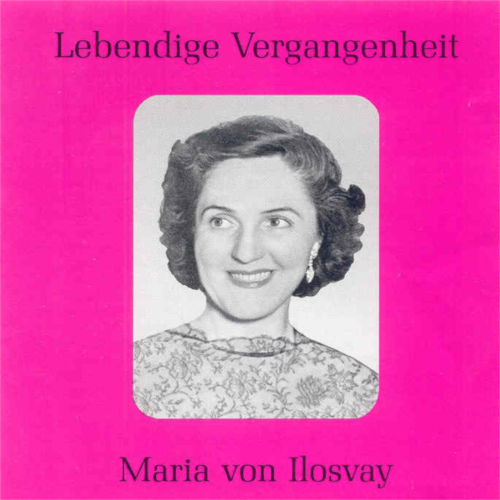 The alto Maria von Ilosvay was born in Budapest on 8 May 1913. She received her vocal training at the conservatory in her hometown and at the Academy of Music in Vienna. While in Budapest she was a pupil of Laura Hilgermann, Felicie Kashovska and Mária Budanovicz . In 1937 she won first prize in an international singing competition in Vienna. She was subsequently hired to sing with the Salzburg International Opera Guild, a private initiative of Paul Csonka to present the early Mozart operas. The famous American impresario Sol Hurok heard about this experiment, advised Csonka to assemble a larger company with a more unusual repertoire, and promised to organise an American tour. Thus it came to pass that Maria von Ilosvay, at that time still singing under the name Esther von Ilosvay, toured America from October 1937 to March 1938. The repertoire included Così fan tutte, with Ilosvay creating a sensational Dorabella, and the three one-act operas Le Pauvre Matelot by Darius Milhaud, Angélique by Jacques Ibert and La cambiale di matrimonio by Rossini, with Ilosvay singing in the latter two works. Ilosvay also appeared in L’incoronazione di Poppea by Claudio Monteverdi in new version by Ernst Krenek. In 1940 she was engaged to sing at Hamburg’s Staatsoper and remained a member of that ensemble until the end of her stage career. Notable performances there included the première of Giselher Klebe’s opera Jacobowsky und der Oberst (Jacobowsky and the Colonel) on 2 November 1965, and Milko Kelemen’s Der Belagerungszustand (The State of Siege) on 13 January 1970. After the Second World War, Ilosvay made guest appearances at the state operas of Vienna, Munich and Stuttgart, Covent Garden Opera in London and La Scala in Milan. Her appearances from 1953 to 1958 at the Bayreuth Festival made her world famous. She sang Erda in Rheingold and Siegfried, Schwertleite in Die Walküre, the 1st Norn and Waltraute in Götterdämmerung (in 1956 the 2nd Norn, in order to make way for Jean Madeira as the 1st Norn). She also sang the alto solo in Parsifal. At the Salzburg Festival on 15 August 1948, she took part in the first stage performance of Le vin herbé by Frank Martin, and on 9 August 1949, in the première of the opera Antigonae by Carl Orff. With the ensemble of the Hamburg Staatsoper she was a guest at the Edinburgh Festival and in the British stage première of Stravinsky’s Oedipus Rex at the Holland Festival in 1956. Beginning that same year she had a guest contract with London’s Covent Garden Opera. She was also highly acclaimed as a concert artist. Maria von Ilosvay died in Hamburg on 16 June 1987. Ilosvay remained sadly neglected by the recording industry; due to their format – 10-inch (25-cm) discs – the two solo records she made for Philips were soon removed from the catalogues. In 1953 she took part in the complete recording of the opera Hänsel und Gretel under Herbert von Karajan, singing the role of the Mother. In 1955 she made a recording of Verdi’s Messa da Requiem in Rome under the baton of Paul van Kempen; the other soloists were Gré Brouwenstijn, Petre Munteanu and Oskar Czerwenka. In addition there are recordings of live performances in Bayreuth, of which the 1953 Ring under Clemens Krauss deserves mention.