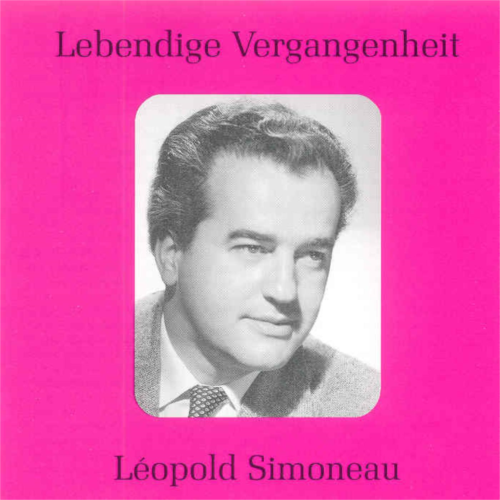 Elegance, Clarity, Refinement – The Vocal Artistry of Léopold Simoneau. Among the tenors of the post-war years, the French-Canadian singer Léopold Simoneau, who was born on 3 May 1916 near Quebec city, is without a doubt the most elegant stylist of the French lied and operatic repertoire and at the same time one of the outstanding Mozart interpreters of the period. His sweetness of sound, subtlety of nuance and aristocratically elegant phrasing lent an extraordinary quality to all five studio recordings of Mozart operas in which he participated. The naturalness of diction and eloquence of expression that characterise Simoneau’s vocal artistry make one think of a concept of the French composer, conductor and writer on music Reynaldo Hahn, which he formulated in his book Du Chant: “If the voice is not linked to the text by lively, sensitive diction, it does not matter how well the singer otherwise sings. His voice may be correctly placed, his speech flawless, but he does not speak and thus he says nothing.” That Simoneau took Hahn’s maxims to heart is obvious from the fact that the singer translated this book from French into English in 1990. Several years later he published his own work, L’art du Bel Canto, in which he explained his personal convictions, based on a Hahn’s teachings, on correct, eloquent and beautiful singing. The singer ended his stage and concert career in 1970 in Montreal in a joint appearance in Handel’s Messiah with his wife, the soprano Pierrette Alarie. The tenor explained his early farewell at the age of only 54 as follows: “I wanted to stop while my voice was still completely intact and I was still credible in my roles.” Simoneau received his vocal training in Montreal under Émile la Rochelle and Salvator Issaurel as well as in New York under Paul Althouse. He launched his career in Montreal as well, singing Wilhelm Meister in Mignon by Ambroise Thomas in 1943, having previously appeared in several minor roles. From the very beginning, French and Mozart operas were the two pillars of his repertoire, which included about two dozen stage figures. Following further appearances in Canada and the US, Simoneau went with his wife to Europe in 1949 to sing at the Opéra Comique in Paris. His first role there was Vincent in Gounod’s Mireille. Quickly establishing his reputation, he was immediately invited to sing at the Paris Opéra (1949 Tamino in Die Zauberflöte, 1953 Damon in Les Indes galantes, Alfredo in La traviata), at the festivals of Aix-en-Provence (1952 Pylades in Iphigénie en Tauride), Glyndebourne (1951-52, 1954 Don Ottavio in Don Giovanni, 1951-52 Idamante in Idomeneo) and Salzburg (1956 Don Ottavio, Berlioz Requiem, 1959 Tamino, lieder recital), at Milan’s La Scala (1953 Don Ottavio) and the Vienna Staatsoper (1953 Ferrando in Così fan tutte, 1954 Don Ottavio). He was invited to sing at New York’s Metropolitan Opera in 1963, relatively late in his career, and appeared only four times there as Don Ottavio. Following the end of his active singing career, he taught voice in his native Canada and in San Francisco. In 1986 he founded Canada Opera Piccola, a chamber-opera company. The end of Léopold Simoneau’s career was more than just a personal biographical turning point; the French school of singing has thus far failed to produce another lyric tenor of comparable quality.