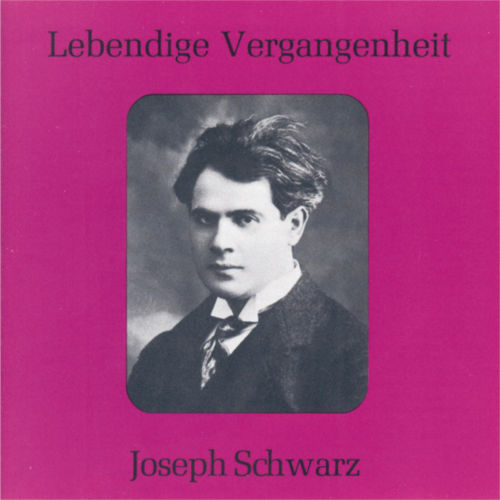 The baritone Joseph Schwarz, born on 10. October 1880 in Riga (Latvia), was one of the most remarkable in the longline of belcanto singers. According to contemporary reports, the effect this artist had on his audience was quite extraordinary. Blessed with one of the most refulgent baritone voices of his time, he combined emotional intensity with the classic belcanto style. The rarified artistry of his singing afforded him a quite exceptional vocal flexibility in a wide­ ranging repertoire. On top of that came the effectivity of the sensual coloration of his voice. All this enhanced the intensity of his style, which was based on a secure belcanto technique that Joseph Schwarz continued to perfect until his untimely death. The plangent quality of his voice was able to evoke an equally emotional response in his listeners. -This ability was enhanced by his superb stage presence and, in due course, an ever-more differentiated histrionic ability. Thus the name of the artist soon came to be regarded as the incarnation of Italian opera. Joseph Schwarz was of Jewish extraction, one of ten children of an impoverished tailor and grew up in poverty-striken circumstances. the vocal talent of the young tailor apprentice were discovered at an early stage. Wealthy Russian connaiseurs, who realized Schwarz potential, encouraged and financed his studies. After a sojourn in Berlin, Schwarz went to Vienna and started tuition with Adolf Robinson. The extremely handsome young man made his debut in 1902 as Amonasro in Verdi's "Aida" in the Landschaftliches Theater in Linz. Subsequently he toured with enormous success and eventually returned to his home town Riga and the Imperial Opera in St. Petersburg. Eventually he was engaged at the Vienna Volksoper and later became a member of the Imperial Vienna Opera where he remained a lauded member of the ensemble from 1909 to 1915. It is reported that initially the sensitive artist was not quite up to the demanding artistic assignments he was entrusted with. After the sudden demise of the popular Leopold Demuth he took over the latter's roles. Gradually Joseph Schwarz succeeded in adapting to the extremely volatile artistic climate prevalent in the Vienna of the time. Triumphant acclaim soon followed, especially when he partnered Enrico Caruso, who often made guest appearances in Vienna at the time. Apart from his Wagner repertoire (Amfortas, Wanderer and Wolfram) Schwarz' repertoire in those years included Scarpia, Germont, Rene and Valentin in Gounod's "Faust". On the occasion of a guest appearance in Berlin in 1915, where Joseph Schwarz was hailed as a second Battistini, the singer decided to terminate his contract with the Vienna Opera and to move to the German capital. Thereafter Berlin remained his artistic home. Soon one of the most splendid and popular members of the ensemble, Schwarz became a superb interpreter of the German, Italian and French baritone repertoire. Above all his compelling, psychological study of Iago in Verdi's "Otello" made theatre history in Berlin. With concerts and tours through the United States in 1921, Schwarz had reached the pinnacle of his fame. For several years he was associated with the Civic Opera Company in Chicago and this soon led to engagements at the Metropolitan Opera as well as several other important opera companies. Joseph Schwarz was now an internationally recognized artist. His artistry was greeted with enthusiasm whenever he appeared on the operatic- or recital stage. From the long list of his stage successes, his Rigoletto must be singled out for special praise. In this role he triumphed throughout the world and his histrionic ability caused his style to be compared to Chaliapin's. Joseph Schwarz died on 10. November 1926 of kidney failure. On 26. October he had taken part in a charity concert, where he had proved once more that vocally he had reached the apex of his career.