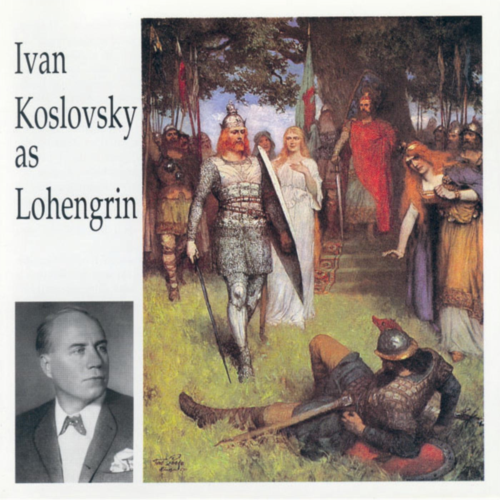 When the curtain of Moscow's Bolshoi Theatre rose on the evening of 24 March 1990 it looked as though a routine performance of Tchaikovsky's "Eugene Onegin" was beginning. Everything proceeded as usual until Lensky's entrance in the first act, when he introduces his friend Onegin. Instead, Lensky announced "a ninety-year­ old", and to the frantic applause of the audience there appeared a tall, slim, lively, white-haired man in elegant tails: IVAN KOSLOVSKY. Lensky altered his confession of love to Olga; he did not sing "Olga, I love you", but rather "Ivan, we love you". lt was not Tatiana but Koslovsky to whom the chorus offered birthday congratulations, and finally everyone burst into the drinking song from "La Traviata". After the interval, the stage was transformed into a hall of fame: there were speeches by the minister of culture and the head of the Moscow Conservatory, telegrams from Mikhail and Raissa Gorbachev, and from Mstislav Rostropovich and his wife, the soprano Galina Vishnevskaya, bouquets of flowers - a floodtide of tribute engulfed Ivan Koslovsky. It is difficult to imagine a similar homage to an opera singer anywhere else. But even in Russia, which cherishes its vocal idols, Ivan Koslovsky is an exception. In the cultural ice age of the Stalin era he was one of the country's most famous singers, along with the hass Mark Reisen and his "perpetual" rival Sergei Lemeshev. While Lemeshev's boyish charm ( a quality he shared with Jan Kiepura) drew general affection, Koslovsky was more of an artist for connoisseurs, a sort of cross between Richard Tauber and Helge Rosvaenge. With Tauber he had in common an exquisitely cultured piano technique and a refined voix mixte, and with Rosvaenge the phenomenal top notes and electrifying verve. Koslovsky's vocal timbre needs more than a little getting used to, especially for western ears. It is conspicuously bright and androgynous; it could almost be called "white" and possesses the sorrowful, melancholic note that is characteristic of Slavic tenors. Koslovsky was a genuine lyric tenor, but in contrast to many of his lyric colleagues his perfect technique gave him an effortless penetration and wide-reaching projection which enabled him to fill even the huge auditorium of Moscow's Bolshoi Theatre. Added to this was his unusually wide range of nearly three octaves: at the top he could take an incredible F above high C. These extraordinary vocal qualities made it possible for him to excell in roles for which other lyric tenors usually do not have the endurance: as Lohengrin, for example, which he sang at the age of 27 in Moscow; as Pinkerton in "Madame Butterfly", Don Jose in "Carmen", Massenet's Werther and Gounod's Romeo. Koslovsky's style of singing and phrasing is certainly not free of elements of wilfulness and self-indulgence, but he makes up for this by the elegance and musicality of his delivery, by his ability to mobilize both lyricism and emphasis, and to delineate intuitively the musical physiognomy of a figure. It is not by chance that a tiny but demanding character role was among his greatest portrayals on the stage: the Fool in Mussorgsky's "Boris Godunov", which he sang both on the legendary complete recording conducted by Nicolai Golovanov and in the film version of the opera. His forceful and moving characterization makes the Fool the key figure of the opera. Ivan Semyonovich Koslovsky was born as the son of simple peasants on 24 March 1900 in a village not far from the Ukrainian capital, Kiev. After finishing his vocal studies, which he began at 17 in Kiev, he got his first stage experience at the theatre in Poltava, where he made his debut in 1922 in the title role of Gounod's "Faust". In the early years of his career he was entrusted mainly with the more lightweight parts such as Lensky, Alfredo in "La Traviata", the Duke in "Rigoletto". Kharkov and Sverdlovsk were further stopping points, until in 1926 he appeared for the first time in the house in which for three decades he and his rival Sergei Lemeshev ruled the lyric tenor repertoire, the Bolshoi Theatre in Moscow. The search for new musical ground to cover in the field of opera led Koslovsky to act on his own initiative. At the end of the 1930s he founded his own opera ensemble which gave concert performances of several works that were rarely played in Russia, for example Massenet's "Werther", Gluck's "Orpheus and Euridice" and Leoncavallo's "I Pagliacci". For all his more than 50 operatic roles, 25 of which are preserved on complete recordings by the Russian state company "Melodiya", Koslovsky's stage career was outstripped by his career as a concert artist. He was only 19 when he began singing recitals, and he was still appearing in the Grand Hall of the Moscow Conservatory at the age of over 70. There are several live recordings made on these occasions which attest to his astounding vocal longevity. The variety of his song repertoire was drawn not only from the inexhaustible resources of Russian romances, folksongs and art songs; Koslovsky was just as familiar with the art songs of German classicism and romanticism, with Beethoven's "An die ferne Geliebte", Schumann's "Dichterliebe" or Schubert's "Die schöne Müllerin". Furthermore, he gave first performances in the Soviet Union of rarities such as Britten's ''Serenade for Tenor, Horn and Strings'' and Chausson's "Poeme de l'amour et de la mer". Koslovsky's incomparable artistic presence and intensity in the concert hall are described by his compatriot, the writer Ilya Ehrenburg: "Ivan Koslovsky feels the beat of the human heart. That is why he is close to everyone who listens to him. He can sing to a huge audience, and yet everybody there believes that Koslovsky is singing only for him." On 21 December 1993 Ivan Koslovsky died in Moscow at the age of 93.