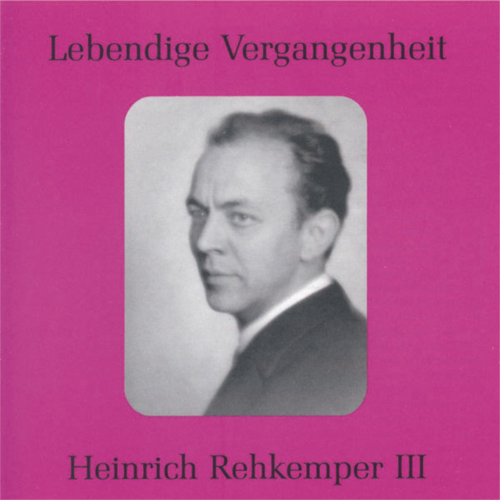 Heinrich Rehkemper was born on May 23, 1894 in Schwerte, Westphalia. He originally trained as a machine tool constructor, but after his remarkably beautiful voice was disco­ vered, he commenced his studies at the conservatories in Hagen and Düsseldorf. Later he continued his studies at the Music Academy in Munich. After his trainee years at the Landestheater in Coburg, where he made his debut in 1919, Rehkemper joined the Stuttgart State Opera ensemble in 1923. He remained there until 1925. Already at that time his special talent in the "Lieder" sphere was commented upon and "Lieder" singing became the vital element of his splendid career. Innumerable tours throughout Germany and abroad laid the foundation stone for Heinrich Rehkemper's enduring fame as German "Lieder" singer. Richard Strauss was among his most fervent admirers and., after a joint concert tour through Norway, Strauss wrote that "it was a wonderful experience to be able to accompany such a splendid singer." Rehkemper was especially associated with the oeuvre of Franz Schubert, Johannes Brahms and, above all, Hugo Wolf. Already before Heinrich Rehkemper became a permanent member of the Munich State Opera ensemble, he made his debut there on February 24, 1922 as Wolfram in "Tannhäuser". His subsequent career came to an abrupt end because of a serious heart ailment. Initially, however, Heinrich Rehkemper was lauded one of the most popular and talented metnbers of the ensemble. Among the vast repertoire that Rehkemper sang in Munich, the lyric roles in numerous German "Spieloper" as well as Mozart roles - especially Guglielmo and Figaro - were predominant. In the latter role not only the lovable 'joie de vivre' but also the histrionic talent as well as the rumbling underpinning of the looming revolution was especially evident. Heinrich Rehkemper also took part in numerous first performances in Munich. Thus on November 30, 1928 he contributed to the success of Puccini's "Il Tabarro" opposite Hilde Ranczak and Julius Patzak and on December 22, 1934 he was not only a superlative Macbeth but, on November 29, 1936, he also portrayed the eponymous hero in Hermann Reutter's "Doktor Johannes Faust". Meanwhile appointed "Kammersänger", Rehkemper expanded his repertoire to include heavy baritone roles. Special mention must be made of his sharply delineated Beckmesser but also his Carlos in Verdi's "Forza del Destino" and - last but certainly not least - his expressive Rigoletto. Unfortunately Heinrich Rehkemper_ had to terminate his career at his culmination point but his artistry was so widely admired that he remained a fixture of the artistic environment until his death on December 30, 1949. After terminating his singing career he continued to teach at the Mozarteum in Salzburg from 1940 to 1945. Heinrich Rehkemper was a splendid, uncomplicated artist. He was a member of a generation of singers whose traits did not include the hyper-sensitivity of current singers. lt was rather his spiritual balance that remained unforgotten and incomparable. His talent was delineated by the laws of a humanistic epoch. Heinrich Rehkemper did not forgo the heartfelt tones of vocal expression - on the contrary, they were a preeminent feature of his artistry. as the critic Max Graf once put it, "for him the greatness and simplicity of art became a primary aspect, not only its idealistic aspects but also the old tradition, the unbroken, mental strength and, ultimately, the genuine sincerity, which is the fulcrum of spiritual training, unsullied by the mercantile spirit of a materialistic era".