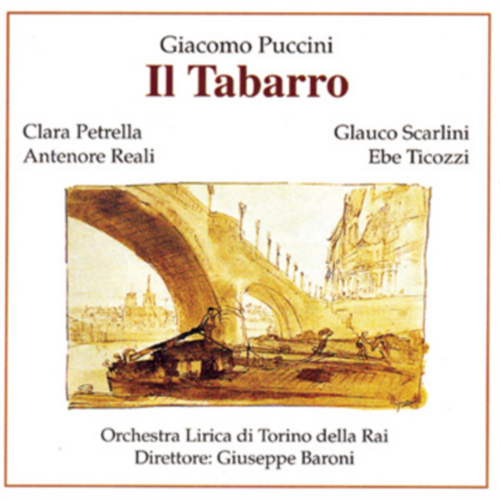 “IL TABARRO” is the first of the three one-act operas by Giacomo Puccini which together are known as “Il Trittico” or “The Triptych.” The other two are “Gianni Schicchi” – a witty, brilliant masterpiece which is the best known of the three – and the mystic “Sour Angelica.” The triplicate world premiere took place at the Metropolitan Opera, December 14, 1918. “ Il Tabarro” is a thriller, a starkly realistic tragedy. The title means “The Cloak.” The action takes place on a barge, anchored on a bend of the river Seine in Paris. The love triangle revolves around the skipper Michele, his young wife, Giorgetta, and her lover Luigi, a longshoreman who has been hired to help load the barge. Giorgetta gives Luigi a rendezvous for that night; when she lights a match it will be the signal for him to come aboard the barge. Michele, alone with Giorgetta, reproaches her for her coldness. To cut short the conversation, she says she is tired and goes down to her cabin to retire. Pacing the deck, Michele broods darkly on Giorgetta’s action. He takes out his pipe, strikes a match. Luigi, mistaking it for Giorgetta’s signal, climbs aboard. Michele seizes him, forces him to admit that he is his wife’s lover, and strangles him. He covers the body with his cloak so that when Giorgetta comes up form her cabin, she finds her husband sitting calmly smoking his pipe. But she is fearful and suspicious. She tries uneasily to conciliate Michele. Coquettishly she asks if he does not want her nearer to him. “Where…under my cloak?” he asks. Giorgetta answers: “Yes, you used to tell me: ‘Every man carries a cloak which hides, sometimes joy, sometimes sorrow.’” And sometimes crime!” cries Michele as he tears the coat from Luigi’s body and throws Giorgetta down on the corpse of her lover. This recording of “Il Tabarro” was made at a commemorative performance marking the 25th anniversary of the death of Puccini. The composer, born December 22, 1858, died November 29, 1924.