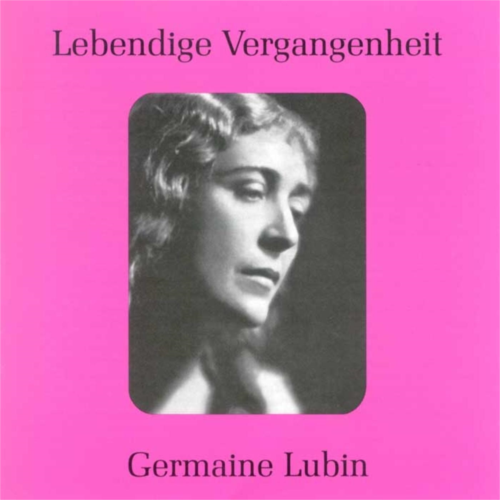 Gennaine Lubin, the greatest dramatic soprano France produced in this century, was bom on February 1st 1890 in Paris. For a certain time Lubin thought about following her father's footsteps, who was a doctor, but she soon decided to study voice with de Martini and Isnardon at the Conservatoire de Paris. Gabriel Faure himself, then director of the Conservatoire, taught her a large part of his songs which she kept in her concert repertory until the end of her career. In 1913 she chose the role of Antonia in "Les Contes d'Hoffmann" for her debut at the Opera Comique where she mainly concentrated on lyric roles such as Gounod's Juliette and Thais during her first years and took part in the world premiere of Vincent d'Indy's "La Legende de Saint Christophe" (with Paul Franz as her partner). After two years she moved on the Opera (debuting role: Marguerite in "Faust"), Jaques Rouches was then its director, which became her artistic home until her glorious career came to an unworthy end. Shortly after the end of World War I the singer appeared at the Opera House of Monte Carlo ("Thais" with Battistini, "Aida" and "Tosca" with Gigli and Octavian in "Der Rosenkavalier" with Ritter-Ciampi and the great Vanni-Marcoux under Victor De Sabata and with Max Reinhardt as stage director). "My diction was far from perfect and I was not a born actress" she confessed in an interview with Lanfranco Rasponi, "but under the guidance of my teacher and friend Felia Litvinne not only my diction improved remarkably but I also became a real actress. I owe it all to her." During the first years at the Opera she continued to appear mainly in French Opera but also sang some Aidas and Toscas. In 1921 if was decided that it was time to bring Wagner back into the repertory of the Opera. Lubin's first great success as a Wagner-singer proved to be Sieglinde, one year later as Elsa she already was the leading soprano at the Opera and Eva followed the next season. As Elsa under Clemens Krauss she made her debut at the Vienna State Opera in 1924 and was equally successful as Marguerite in "Faust" and Ariadne (under Strauss). Lubin studied the role of Donna Anna in "Don Giovanni", which she first sang under Bruno Walter in Salzburg in 1931, with Lili Lehmann, she prepared Alceste (1926 at the Opera with Georges Thill) with Felia Litvinne and Elektra (1932) with Marie Gutheil-Schoder which proved one of her greatest triumphs both as a singer and as an actress. Tue soprano created several works of contemporary French composers: "Le Pays" by Guy Ropartz, "Maximilien" by Milhaud, the Duchess Sanseverina in Sauguet's "Chartreuse de Parme" and Dukas' "horribly long and difficult" opera, "Ariane et le Barbe-Bleue". Lubin frequently sang at London's Covent Garden Opera (among other roles as Kundry in 1927) as well as in Vienna, Zurich, Geneva, Amsterdam, Prague and Brussels. Although she was invited to make her debut at the Metropolitan Opera in New York on several occasions the opportunity never occurred and later was made fully impossible by the outbreak of War. Lauritz Melchior recommended her to Heinz Tietjen of the Berlin State Opera after a guest performance as Parsifal at the Opera. Her overwhelming debut on February 20th 1938 as Sieglinde led to an engagement at Bayreuth where she made her debut as Kundry in 1938 (at the age of 48!) and not without some hesitation did she accept an invitation to return the following year as Isolde (with Max Lorenz under Victor De Sabata). It was her Isolde at Bayreuth, only some weeks before War broke out, which probably was the greatest artistic triumph of her career. Lubin flatly refused to come to Bayreuth the following year and stayed instead in occupied France but she did sing Isolde in a guest performance of the Berlin State Opera under the direction of Herbert von Karajan. To her vast repertory she added Fidelio and a wonderful Marschallin in ''Rosenkavalier" and was chosen to appear as Charlotte in "Werther" on the occasion of Massenet's centennial in 1942. A performance as Alceste in 1944 proved tobe her last appearance on an operatic stage. When France was finally liberated she was prohibited to appear publicly as a result of numerous rumors and accusations (last but not least her close friendship with Winifred Wagner) and part of her property and her passport were confiscated. Not until 1950, after all accusations had proved groundless, she gave a concert in Paris on May 29th which turned into a personal triumph. Two more concerts followed in 1952 and 1953 but at the age of already 60 it was too late to start all over again. Until her death Lubin could not find peace: "Like Amfortas", she _declared bitterly, "my wounds are destined to remain open." When her son, Claude, committed suicide in 1954, also in consequence of the false accusations concerning his mother, she decided never to sing again. When Germaine Lubin closed her eyes forever on October 27th 1979 the press celebrated her as one of France's immortal national monuments... "Germaine Lubin had everything", the French critic, Andre Tubeuf, raves, "a rich and warm soprano voice of great volume and luminosity which could also produce the softest pianissimo. Her voice had a remarkable agility and apart from a wonderful high c she could sing a genuine trill. Her close friendships with Hofmannsthal and Reinhardt give evidence of her intellectual culture and hardly anybody could escape the spel of the noble and radiant beauty of this great personality."