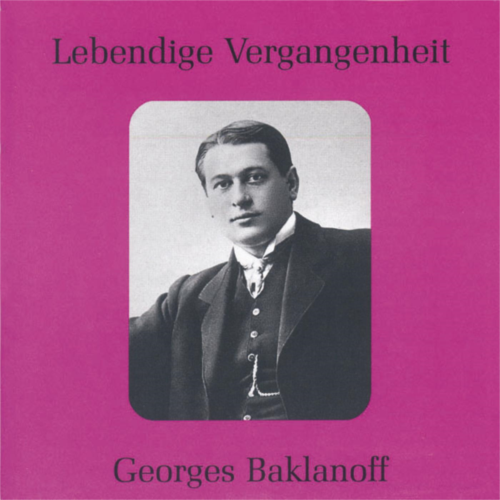 As Georgij Andrejewitsch Bakkis the singer was born in St. Petersburg on January 18th 1882. After the early death of his parents he was brought up by his guardian in Kiev, where he studied law first at the local Univercity and later in St. Petersburg. The remarkably high standard of Russian-theatre tradition at that time had such a great impact on young Baklanoff, that he decided to give up his plans for a career as a lawyer and study singing instead. His first teacher was the famous Russian tenor, Ippolyt Pryanischnikow, in St. Petersburg and from 1902 on he completed his studies with Vittorio Vanza in Milan. At the Opera House in Kiev he made a much acclaimed debut in Rubinstein's "The Demon" in 1903 and found himself at the Imperial Opera House of Moscow in 1905, where he took part in the world-premieres of two Rachmaninov operas: "The Miserly Knight" and "Francesca da Rimini" (both in 1906\ From 1907 on he appeared at the Court Opera in St. Petersburg andin 1910 gave his first performance at the Covent Garden Opera in London, where his Rigoletto and Scarpia were greatly praised. The same year saw his only appearance for the Metropolitan Opera, which took place as Rigoletto during a tour. In 1909 he sang on the opening night ofthe newly found Boston Opera, where he remained until 1914 singing in "La Gioconda", "Aida", "Rigoletto", "Carmen", "Faust", "Tosca", "I Pagliacci", "Otello", "L' Amore dei tre Re" and "Andrea Chenier" and Telramund in an Italian production of "Lohengrin" on tour. Guest performances brought Baklanoff to the Grand Opera in Paris, the Scala of Milan, the Munich Court Opera, the Komische Oper in Berlin, the Opera House of Monte Carlo (world premiere of Ponchielli s posthumous opera "I Mori di Valenza" in 1914) and the Vienna Court Opera, where he was very popular. Both his Viennese debut (on October 19th 1911) and his farewell performance (on May 12th 1928) saw Baklanoff in the role of Rigoletto. After the outbreak of World War I he returned to Russia and was promptly sent to the frontline at the Austrian border. After the War the singer enjoyed a glorious career at the Chicago Opera in the years between 1917 and 1928. Together with Mary Garden he frequently was cast in French Opera: "Louise", "Cleopätre", "Thais" and "Monna Vanna" by Fevrier (on the occasion of its American premiere in 1918). Furthermore he sang in Alfano's "Resurrection" and in "Faust" (with Nellie Melba and Lucien Muratore) and also portrayed two of his most celebrated roles: Wotan and Boris Godunov. In the years between 1928 and 1935 he was under contract with the Philadelphia Opera. From around 1926 on he concentrated his activities more and more on European Opera Houses and lived in Switzerland from 1932 on appearing as Don Giovanni at the Opera House of Basel. Still in 1932 Baklanoff was heard in "Tiefland" at the Festival in Zoppot/Germany and gave his last performances at the Volksoper in Berlin in July 1938. Barely six months later, on December 6th 1938 Georges Baklanoff died of a heart trouble, from which he had suffered for some time, in Basel. As one of the most outstanding and impressive singing-actors of his time, Georges Baklanoff s achievements, similar to those of Chaliapin in the bass-repertory, were truly exemplary and have led the way to "modern" musical theatre. He was fascinated by the theories of Russian director, Konstantin Stanislawski, and with his own immense imagination, his towering and imposing physical appearance and striking personality he transferred Stanislawki's ideas to the operatic stage. Baklanoffs stage make-up was generally admired and his portrayals always had something demonic and bizarre about them, which held his public in a spell. Jarmila Novotna, who was his partner in "Rigoletto" in Prague and in "Les Contes d'Hoffmann" in Berlin in 1931, too, was­ among Baklanoff's admirers, as she is quoted in Lanfranco Rasponi's book, "The last Primadönnas": "the voice was not exactly velvety in texture but infinitely expressive and chilling."