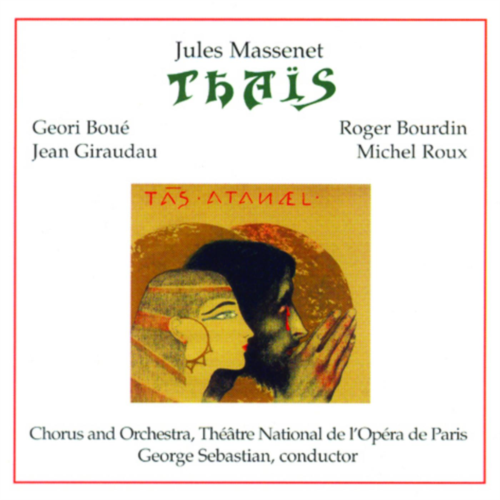 This work opens among a gathering of religious men known as Cénobites, in the desert of Thebes. Athanaêl, one of them, has just returned from Alexandria, a city whose unholy pleasures have revolted him, though in his earlier youth he had, himself, trodden there the rosy path. In his sleep he has a vision of Thaîs, the reigning beauty, acting in the theatre of Alexandria before an immense crowd. Waking, he resolves to go and save the soul of the courtesan. The chief Cénobite would dissuade him from the dangerous mission, but he adheres to his purpose and departs. The second scene is in the sumpouous house of Nicias, one of the principal voluptuaries of Alexandria. Though Athanaêl arrives in most sordid attire, Nicias receives him kindly as an old friend, but when he tells his mission, Nicias laughs him to scorn. However, that he may properly meet Thaîs in her resplendent surroundings, Athanaêl is made to don purple and fine linen. Thaîs comes and curiosity, after a time, causes her to inquire as to the new guest whose severity of mien is unusual in her surroundings. Athanael tells her bluntly that he has come to bring her to the only true God. Thaîs is sceptical, though the earnestness of Athanaêl makes an impression on her. In the SECOND ACT, the first scene shows a room in the abode of Thaîs. She is alone, after dismissing her train and, though a priestess of Venus, finds that fugitive love grows at times tedious and unsatisfying. She prays the goddess for eternal beauty as Athanaêl appears. She treats his words flippantly at first but as he proceeds to unravel the plan of a life everlasting beside which the shameful pleasures of to-day are as nothing, she is impressed, despite herself. Then she grows frightened and at last defiant. Athanaêl leaves, swaying he will pass the night on her doorstep. The second scene shows the square in front of the house. Athanaêl sleeps. Thaîs comes from the house to tell him that she is ready to follow, if he will lead. All she wants to keep is a small statuette of Eros. But Athanaêl smashes it to pieces and tells her to go within and put a lighted torch to all her earthly possessions. At this moment Nicias, who has won a forune at gaming, emerges from a house opposite with his companions and orders a diversion of singing, dancing and drinking. As this proceeds Thaîs comes out, meanly clad, followed by her lamenting women. She joins Athanael and flames are seen to issue from the house. As it burns, the populace grow excited and resent the taking off of Thaîs. Their fury concentrates on Athanaêl and they forcibly attempt to oppose his progress. They wish to burn him, hang him, and thus save Thaîs. When the excitement grows greatest, Nicias causes a diversion by throwing gold to the people. In the midst of the mad scramble, Thaîs and Athanaêl escape. In the THIRD ACT we see Athanaêl and Thaîs, the latter almost dead with fatigue after a long painful journey, reach the oasis. Athanaêl bathes her bleeding feet and brings her food. He uses endearing terms to the sufferer and, at the appearance of Albine and the White Ladies, delivers her over to them to pass her life. When they bid farewell Thaîs is spiritually exalted but his affection has become more human. Scene second shows the home of the Cénobites again. Athanaêl is in despair and confesses to Palêmon that, despite his prayers and flagellations, the image of Thaîs is always before him – he loves her. Then in a vision Thaîs appears to him, first as the courtesan as she was, and now, dying at the monastery in the desert. (omitted in this recording) The third scene shows the monastery. Thaîs lies dying. The White Ladies look on her as a saint, for she is worn out with penance and repentance. Athanaêl comes. He hopes to bring her back to life and carnal love, but she is beyond earthly emotion. Quoting Athanaêl´s own maxims, she sees heaven open before her and hears the rustle of angel’s wings, and while he calls upon her in despairing tones to come back to him, her gentle spirit passes away.