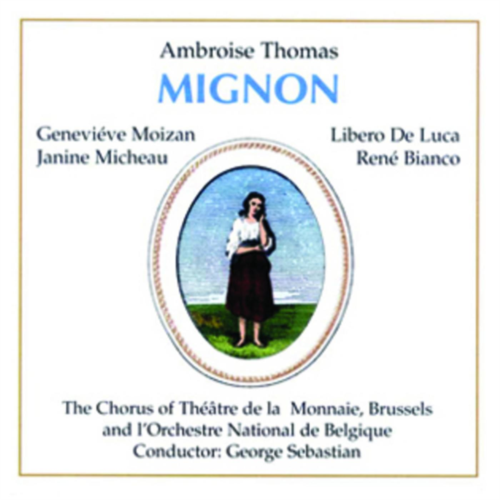 Mignon conforms with the heroines of many romances of the time in that she was lost by her parents. Gypsies have adopted her. Act I. As the curtain rises we see Wilhelm with a group of merry strolling players of which he is a member gaily celebrating a public holiday at an old inn. He is fascinated by Philine, the leading actress of the players, and has given up his student career for her sake. Presently a band of gypsies appear and the gypsy chief Jarno tries to make one of his people dance for the amusement of the revellers. It is Mignon. She is so poorly dressed that Philine bursts out laughing and asks what “it” is. Mignon cannot dance for shame and Jarno threatens her with the whip. Wilhelm intervenes, however, together with an aged and crazy minstrel, Lothario, who has wandered to the spot. Mignon thanks them both gracefully for their protection and vies them a bouquet of wild flowers – all she has to offer. Lothario offers to protect Mignon but Wilhelm is doubtful about such an arrangement, as the old man’s mind is apt to wander a little too much to make him a fit guardian. At last it is arranged that Mignon should follow Wilhelm disguised as a page. The troupe is engaged for some theatricals at the castle of Tieffenbach and Lothario determines to follow them. Act II. Philine boudoir at Tieffenbach Castle. The players are installed at the Castle. Wilhelm, followed by Mignon (in page boy’s guise) enters Philine’s room. Mignon curls herself up on a couch and pretends to fall asleep, though in reality she is watching Wilhelm and Philine covertly. Wilhelm then escorts Philine down to the grounds where the performance is to be held. Mignon is sadly jealous, and as soon as Philine has gone she jumps up and dresses herself in some of Philine’s most gaudy apparel: “just to see what she would look like, “ she explains to herself. She is discovered by Wilhelm who returns to fetch something. Frederic, one of Philine’s most fatuous admirers, enters and finds Wilhelm there. There is nearly a fight, but Mignon intervenes and saves the situation. Philine comes in and an awkward situation arises, for she is bitingly sarcastic to Mignon, and makes Wilhelm realise the awkwardness of having Mignon to follow him about everywhere. Scene2. The grounds of the castle. Mignon is terribly distressed by what has happened, for she realises now that she loves Wilhelm. She is about to throw herself into the lake when Lothario restrains her and is comforting her when a burst of applause comes from the conservatory near by. Mignon tears herself away. “ah, “ she cries, “if only the whole place was struck by lightning and destroyed by fire!”. Lothario stares after her. “Fire? Fire?” he mutters. The actors and actresses issue from the conservatory. The performance is over and Philine who has been playing Titania is in high spirits. She wreaks her spite on Mignon by ordering her hither and thither, sending her to search for a bouquet she has left behind. Mignon enters the conservatory in search of it. Almost immediately the conservatory is seen to be in flames. Wilhelm rushes in and after a desperate groping through the smoke discovers Mignon and carries her fainting from the building. Act 3. Castle Cipriani. Wilhelm now realises Mignon’s love for him. She has been dangerously ill, and to help her recover he has taken her, together with Lothario, to an Italian castle which he says he will buy for Mignon later. Lothario recognises in a sudden flash of memory the surroundings as those of his own castle – the scene reawakes old, long – forgotten memories in mignon’s heart, and with joy Lothario and Mignon recognise in each other a long – separated daughter and father. Mignon is at last happy.