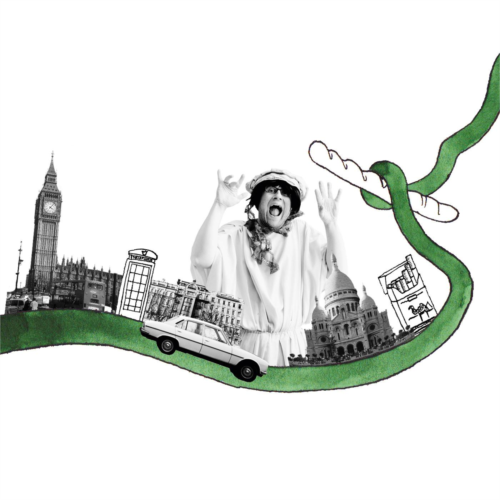 Der Wiener Georg Breinschmid toppt sie fast alle. Lange nicht, vielleicht noch nie, hat ein Musiker - zumal einer aus Europa - zwei CD's, also über zweieinhalb Stunden lang die Lach- und Schmunzel-Muskeln so ununterbrochen gereizt wie der Top-Bassist aus Österreichs Hauptstadt. Von der ersten bis zur letzten Note ist "Brein’s World", die sehr verrückte Welt des Georg Breinschmid, Vergnügen pur. NDR Georg Breinschmid is a wild and crazy guy who plays doublebass, and is based in Vienna. He and his ensemble do jazzed-up classical themes, odd little waltzes and other dance numbers, satirical songs, and who knows what else. Trumpeter Thomas Gansch is often featured. There are two separate note booklets, one for each of the CDs, and the performing artists are listed, along with at least a summary of all the lyrics sung in German. Brein also did the artwork on the album. There are humorous little stories (or at least what passes for German humor) in the notes for each track, which are printed in different directions at various points in the notes. I dubbed off all the instrumental tracks, skipping the vocals, and they are quite witty and often swinging. Some sound sort of like a Viennese version of Spike Jones, yet others are delightful little numbers that reminded me of Raymond Scott. Others were in a gypsy jazz bag. Breinschmid has also played with the Vienna Art Orchestra, so that gives you an idea of the wild cross-genre stuff he does. The German lyrics are probably a hoot for those conversant in German, but the preponderance of instrumental tracks outweigh not being able to understand the vocals. There are 28 tracks, 14 on each of the two CDs ranging from under two minutes length to over nine. AUDIOPHILE AUDITION