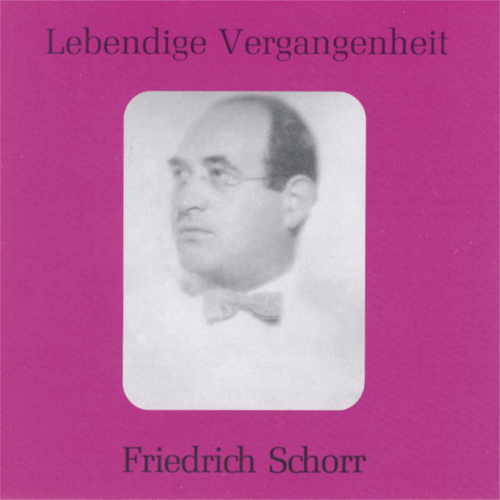 Contemporary reports always claimed that Friedrich Schorr was the most important Wagner baritone of his time. What was true then is equally true now. Scharr avoided any and all dramatic exaggeration, concentrating solely on expressivity. With admirable artistic discipline, he expressed each dramatic moment by purely vocal means, even his vocal eruptions being kept within the bounds of artistry. For Friedrich Schorr, Wagner operas were primarily vehicles to realize the artistic intentions he was striving for. Thus his exemplary interpretations of Wotan, Dutchman and, above all, Hans Sachs made him the pre-eminent Wagner singer of the 1920s and 1930s. Not only did he achieve instant credibility as the power-hungry G9d, he was equally successful in portraying the cobbler-poet as well. His Wotan was as god-like as his Sachs was permeated by poignant resignation, full of lovably subtle humor. Friedrich Scharr was born on 2. September 1889 in Nagyvarad in Hungary. Much to the chagrin of his parents he discontinued his studies of law at the University of Vienna to become the pupil of the legendary Adolf Robinson in Brno, the teacher also of Leo Slezak. Robinson recommended the young man to the management of the Chicago Opera and, during his vacation, he was given the opportunity to try his vocal prowess in small roles, including the steers­ man in "Tristan". On 20. June 1912 the 23-year-old made his debut proper in Graz/Austria as Wotan in "Walküre"- a debut looked upon with skepticism by all concerned. His success was so overwhelming that Scharr was offered a four-year contract. In 1916 he was engaged to appear at the Deutsche Theater in Prague and his fame as a Wagner singer spread rapidly. Blessed with an imposing physique, Friedrich Scharr possessed a voluminous, powerful voice, which, with its exemplary technique and beautiful timbre, evinced all the preconditions to enable him to reach the very pinnacle of vocal artistry. From 1918 to 1923 he was engaged at the Cologne Opera where, apart from his Wagner repertoire, he was acclaimed as Tonio, Amonasro, Michele (Tabarro) and, above all, Pizzaro. The main part of his career, however, he spent in the United States, where, already in 1923, as a member of the German Opera company, he had achieved outstanding acclaim. Gatti-Casazza, who heard Scharr as Hans Sachs, immediately engaged him to appear at the MET, where Scharr remained until 1943. Already on 14. Febuary 1924, when he made his debut as Wolfram in "Tannhäuser" he was regarded as hit of the show. Nevertheless, Scharr was also closely associated with the Vienna State Opera, where he appeared in 1923 and from 1929 to 1936, primarily in the main Wagner roles but also as Scarpia, Escamillo, Sebastiano (Tiefland) and Pizzaro and the Bayreuth Festival, where he appeared as Wotan. In Berlin he sang Borromeo (Palestrina), Barak, Nelusko (L'Africaine) and the emponymous hero in Busoni's "Faust','. He was also lauded at Covent Garden Opera, where he made his debut on 5. May 1924 as "Rheingold" Wotan and appeared regularly until 1933. Schörr made guest appearances all over the world. No matter whether in San Francisco, Buenos Aires or Paris, where he sang Wotan on 27. May 1930 - everywhere he was praised as the outstanding Wagner baritone of his time. On terminating his career, he took up teaching and eventually became the director of the Manhatten School of Music in New York and an opera studio in Hartford-Connecticut. On 2. March 1943 he gave his farewell performance as Wanderer in "Siegfried" at the MET. He continued his concert appearances and directed productions at the City Centre Opera in New York.