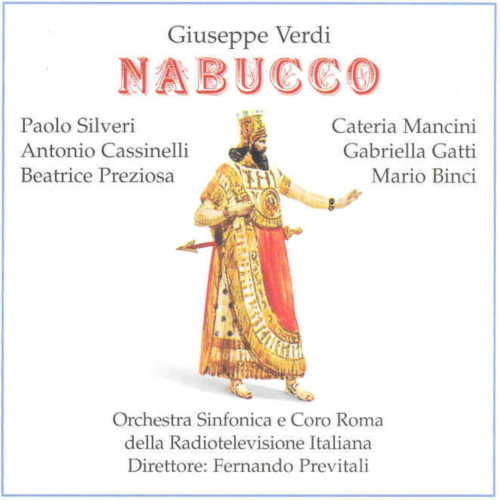 Part 1 Jerusalem. Inside Solomon’s Temple. The Hebrews are appealing to Jehovah to protect them against the armies of Babylon. The chief priest, Zaccaria, has taken Fenena, the daughter of the Babylonian king Nabucco, hostage. Fenena once liberated Ismaele, the nephew of King Sedecia, from Babylonian captivity and followed him to Jerusalem. They are in love. Now Ismaele wants to reciprocate and liberate Fenena. But Abigaille stands in their way. She is considered Nabucco’s first-born daughter, is also in love with Ismaele, and has arrived at the Temple with her soldiers, disguised as Hebrews. When she realises her love is unrequited, she vows revenge. Nabucco occupies the Temple, and Zaccaria threatens to kill Fenena, but Ismaele prevents it. The soldiers are given permission to sack the Temple, and the Hebrews are carried off into captivity. Ismaele is considered a traitor to his country. Part 2. The Wicked. Scene 1: Chambers in Nabucco’s palace in Babylon. The king has made Fenena regent of the city, while he continues his campaign against the Hebrews. The priests of Baal see that their power is threatened by Fenena and her sympathy for the Jews. The high priest receives a document from Abigail saying that she is the daughter of a slave and was only adopted by Nabucco, making Fenena the true successor to the throne. Abigaille joins the priests in spreading a rumour that Nabucco has been killed in battle. Scene 2: A hall in the king’s palace. Zaccaria converts Fenena to Judaism. Ismaele is cursed by his tribe as a traitor, but is saved by the fact of Fenena’s conversion, and that he was thus helping a fellow Hebrew. Misled by the false rumour of Nabucco’s death, the Babylonians demand that Abigaille be crowned. She demands the crown from Fenena. Nabucco suddenly appears and places the crown on his own head. He blasphemes against the gods of Babylon and the God of the Hebrews, demanding that he should be worshipped as a god himself. Lightning strikes him, driving him mad. Part 3. The Prophecy. Scene 1: The Hanging Gardens of Babylon. Abigaille reigns as queen. The high priest presents her with a death warrant for the Hebrews and Fenena. The mad king Nabucco discovers Abigaille on his throne, but she persuades the confused man that everything is in his best interest and has him sign the death warrant. When Nabucco realises that his daughter Fenena is among the condemned, he wants to regain power and reveal the truth about Abigaille’s birth, but she tears up the document of proof. Scene 2: On the banks of the Euprates, The Hebrews are mourning the loss of their freedom and their homeland. Zaccaria calls for resistance and prophesises the certain destruction of Babylon. Part 4. The Broken Idol. Scene 1: In the king’s palace in Babylon. Abigaille has arrested Nabucco, and he is plagued by nightmares. Awakened by cries and screams, he believes that they are the battle cry of his army fighting against the Hebrews. But when he realises that his daughter Fenena is being taken to her death, he prays to the God of the Hebrews for forgiveness and help. He returns to his senses, and with some of the soldiers who have remained faithful to him, he sets out to rescue Fenena. Scene 2: The Hanging Gardens. The sacrificial ritual is about to begin and the Hebrews are to be killed at Baal’s idol. Nabucco enters and orders the idol to be destroyed. But it falls to the ground by itself, and the Hebrews’ bonds are loosed. Nabucco frees the prisoners. A temple is to be built to Jehovah. Abigaille dies, imploring Fenena and the Hebrews to forgive her.