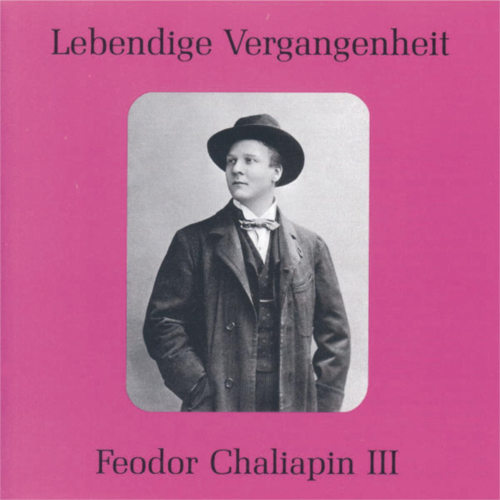 Chaliapin's postumous fame is, somewhat unjustly, primarily based on the recordings he made between 1925 and 1933 and, although they are certainly of enormous importance, they are detrimental as far as a balanced assessment of this artist is concerned. By that time the artist was vocally on the decline and he had to resort to all kinds of fakery, mannerisms and histrionic excesses to cover up for vocal frailties like shortness of breath and loss of the top range. (The manner in which he succeeded in this is one of the marvels of documented singing, however). Like all the recordings of this great artist that have been preserved for posterity, the late recordings are compelling, but there is a danger that the typical instances of a vocal sleight-of-hand are regarded as symptomatic for the style of the artist himself. By that time the voice had lost a great deal of its initial bloom, it had become rough and threadbare. This was partly normal wear and tear but his well-known vice, excessive drinking, must have contributed considerably to changing the character of his voice. Be that as it may, the legend of the so-called "black" Chaliapin bass came about because of the a-typical recordings made in the autumn of his career. The present selection of acoustic recordings of the Italian and French belcanto repertoire tries to show a more unconventional portrait of the great Russian singer. immediately obvious, in comparison to his late recordings, is the lighter tonal texture. Chaliapin was blessed with an unusually expansive range, he reached the lowest bass notes, down to D, quite effortlessly but even more imposing was the resounding top of the voice. This flamboyantly exhibited top would classify him as a bass-baritone. Numerous commentators, including Henry Pleasents in his important study "The great Singers" have in fact made mention of this fact. The early Chaliapin recordings prove that he had a fully equalized, soft textured yet powerful voice of commanding strength and trombone-like volume. The older Chaliapin and the chameleon­ like acting ability which made him such a memorable interpreter of demonic and weirdo roles is so embedded in our minds (not least because of his grandiose portrayal in the Don Quichote film) that we tend to forget the totally different impression he made as a young man. Chaliapin was the first Russian singer to achieve world fame. His first appearances in the West were truly spectacular. At La Scala, Milan (1901), Monte Carlo (1904), the Paris Opera (1906), Covent Garden (1913) he was regarded as something of a vocal cataract. The huge, blonde Cherubin as Geraldine Farrar called him, his towering physique, the power of his voice, his "barbaric" origin, all these factors contributed to his sensational success. Chaliapin became the darling of the elegant opera public, the toast of the fashionable world. This extreme adulation may have contributed to the foibles and extravagances the artist sported ever more frequently in later life. Chaliapin was deemed one of the most excentric artists of his time. His outlanding behavior and habits were recounted with relish in many reports written by his contemporaries. One of the most interesting characterizations of the singer is recounted in Gerald Moore's autobiography. Yet for all his excentricities, Chaliapin was a singer of rare genius. His stature as far as his gramophone legacy is concerned is equaled only by Enrico Caruso.