Plight of a Soldier

Fatel Flows - Plight of a Soldier

Fatel Flows - Plight of a SoldierPlight of a Soldier is a real dope album with lots of great features. If you are into Hip-Hop. You have to listen to this album.About Fatel Flows / Biography:Born in Chicago and Raised in the citys notorious Little Village neighborhood , Fatel Flows body of work reflects his intimate knowledge of street life and gives a glimpse to outsiders of how life on the mean streets of Chicago can either make or break a man. Surrounded by death and poverty Fatel Flows spent his formative years learning the hustle of the streets from some of the best teachers Little Village ever produced. As he got older and began to experience a life outside the neighborhood Fatel realized that there was a world out there that had no idea what the everyday life of a "street solider" is like. The iconic images of Scarface, and Pablo Escobar were not realistic depictions of what the people that worked the product were going through. From selling drugs to cd's, socks to cars, Fatel Flows has made a buck anyway possible. The necessity to pay the bills has never let him forget that hustling is an art form and only a true artist can master it. The film industries images of unimaginable wealth and criminal excess were not his reality, and not for lack of trying but because the odds of making it to kingpin status were as high as making it to the NBA. Disillusioned with a life of hustling he decided to hang up his hat and give people that were not familiar with, or intrigued by the fantasy of the gangster lifestyle a dose of reality. So he put pen to paper and began painting a picture of the hustler's life. His rhymes serve as a testimonial to the fact that being a gangster isn't easy and it definitely is not for the weak willed!The Album Plight of a Soldier was produced by: Jose "Bug N' Beats" MolinaCasualties feat. Aliaz Unknon, DJ Illanoiz from the album Plight of a Soldier was produced by: Jose "Bug N' Beats" Molina / DJ IllanoizEnjoy 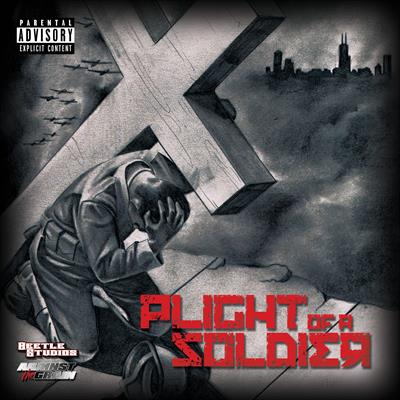