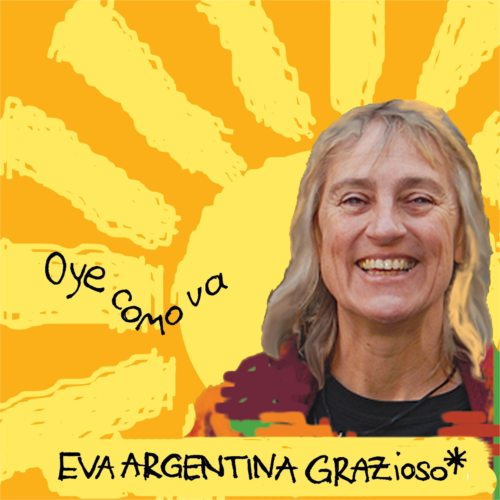 EVA ARGENTINA GRAZioso* and her international musicians from Argentina, Brasil and Austria, feel united when playing together South American music, no matter if it is a Bolivian Huayno or an African rooted Murga from Uruguay.   The band was being put up in 2012, their main focus first being on conveying the folclore and tango of the La Plata countries Argentina and Uruguay. In the meantime their repertoire has expanded towards popular Spanish and Latin American music, musica popular brasileira as well as Latin Rock.  The band leader EVA ARGENTINA is Austrian, however, she feels the vibes of Argentinian and Latin American music in a very special way, as she has spent three years in South America and loves its culture. wih all her veins. Her passion towards this kind of music cannot be ignored.   Pablito Bertone, a magician of global rhythms, knows to incorporate perfectly the rhythms from Brazil, Argentina as well as from Africa.   With the Brazilian guitarrist Daniel Mesquita the repertoire also began expanding towards Brazilian music like Bossa, Forro or Baiao. With the jazzy grooves of Enrique Thompson and Daniel Mesquita the style of the group has got its unique touch. Enrique Thompson, originally also coming from the foklore of his country, incorporates various styles like jazz, samba and tango nuevo. His imaginative soli invite the listener to a journey onto a magic island. Miri Jams, who grew up with music in different languages, and her enchanting voice, top the ensemble.