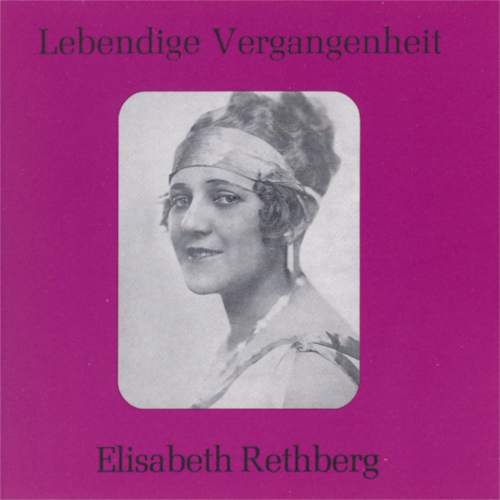 Germany has, of course, produced many fine artists this century, but Elisabeth Rethberg position is somewhat special, for it is rare indeed that a German soprano is universally regarded as one of the "greats" in the Italian repertoire. Many people, in fact, thought that she was Italian by birth, by sheer fluke saddled with a German name. Yet pigeon-holing her as an Italian soprano is quite unwarranted. Elisabeth Rethberg was indeed the most famous exponent of Aida in her time but the great roles of the Italian repertoire always ensure maximum fame anyhow. In fact she was far more versatile than is generally suspected, being also esteemed as a Mozart-, Richard Strauss- and Wagner soprano, supreme, moreover, as Marguerite (Faust) and Micaela, a lauded lieder- and oratorio singer, successful even in operetta roles. Elisabeth Rethberg was born on 22. September 1894 in Schwarzenberg (Saxony). Her father, a school teacher, taught her the rudiments of music. In 1912 she registered at the Dresden conservatoire as a piano student and, although she had already participated in a few vocal recitals favorably commented upon in the local paper, singing was initially relegated to a secondary position. She proved so talented a pianist, especially in the Beethoven repertoire, that she originally planned to become a concert pianist. Eventually her vocal coach, Otto Watrin, persuaded her otherwise. In 1915, at the age of twenty-one, she made her debut at the Dresdener Hofoper as Arsena in "Gypsy Baron". She remained in Dresden for the next seven years, where her partners included Richard Tauber and Robert Burg. Her exceptional musicale­ ty and her ability to learn new roles rapidly - she learnt the role of Elisabeth in ''Tannhäuser" within ten days - enabled her to build up a considerable repertoire. By the time she left Dresden she had already mastered more than one hundred roles, 'including such diverse parts as Octavian and Sophie in "Rosenkavalier" (later she sang the Marschallin as well), Konstan­ ze, Mimi, Empress (Frau ohne Schatten), Tosca, Madame Butterfly etc. At the MET, Gatti­ Casazza, the General Manager at the time, seriously considered entrusting her with coloratura roles such as Lucia and Gilda as well. A true indication of her diversity, although she never actually sang these roles. By 1928 a biography entitled:"'Elisabeth Rethberg, her life and artistry" by H. Henschel and E. Friedrich bad been published. In 1923 she and her teacher, Otto Watrin, travelled to New York and headed straight for the MET, where an Aida rehearsal was underway. Tue story goes that she was immediately requested to sing and, still in her travelling clothes, she launched into: "Ritorna vincitor?" rapturously applauded by the orchestra. She remained on the roster of the MET for the next twenty seasons, singing thirty-five roles, primarily in the Italian repertoire. Especially noted were her Aida, Desdemona, Leonora (Forza and Trovatore), Santuzza but also Donna Anna, Sieglinde, Agathe, Pamina, Eisa and Recha (La Juive). She frequently returned to Dresden where special"Rethberg weeks" were organized. She also appeared at the Salzburg Festival (Konstanze, Countess, Donna Anna) at La Scala and in most other important houses around the world. During her last season at the MET (1941/42) she even ventured to sing Brünnhilde in "Siegfried". Soon afterwards she retired from the stage but continued to live in New York. Rethberg's unique voice and style have been preserved on many records. Her mastery of legato and messa di voce, her perfect head register make her an exemplar for all students of singing. Elisabeth Rethberg was the first German soprano to sing in the United States after the first World War. Her popularity in a country not at all well-disposed towards Germany ensured her the honorary title "German Envoy of Music". In 1929 the New York Guild of Vocal . Teachers - more than three thousand connoisseurs from all over the world - unanimously agreed to award her a gold medal, in recognition of her position as the "most perfect vocalist in the world".