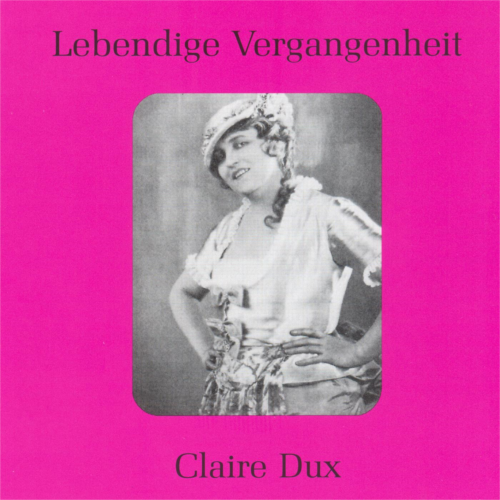 Claire Dux was born on 2 August 1885 in Witkowicz, a small town near Bromberg (now Bydgoszcz) in the formerly Prussian province of Posen (now Pozna in western Poland). However, it would not be correct to consider her a Polish soprano, as some writers did in her obituaries: she was of strictly German parentage. Her singing talent became evident at an early age. At 12 she sang the role of Gretel in a student production of Humperdinck’s fairy-tale opera, attracting the attention of local music aficionados. Her first teacher was Maria Schwadtke, who had studied with the unforgettable Marianne Brandt. She went to Berlin, where she studied with the superb Adolf Deppe and later with Teresa Arkel, who introduced her to the lyricism of bel canto. Dux’s first engagement was in 1906 in Cologne, which at the time was considered an advantageous stepping stone for Berlin. She made her Cologne debut as Pamina in the Magic Flute and over the next five years sang the leading roles for her character type: Marzelline, Fenton’s Nannetta, Almaviva’s Countess, Margarethe, Agathe, Desdemona and Wagner’s Eva, which became one of her most celebrated roles. In Cologne she also sang Mimi, which was not produced there until 12 years after its 1896 première. Particularly successful was Dux’s performance in Humperdinck’s Königskinder, which attracted the attention of the director of the Hofoper in Berlin, where Geraldine Farrar was considered to be unrivalled in the role. Following a guest appearance at the Hofoper in 1909, singing Mimi with Enrico Caruso, she received a fixed engagement there in 1911 and remained with the company for the next seven years. There she sang the first Sophie, making such an impression that Sir Thomas Beecham invited her to take part in the first British performance of Rosenkavalier. The critics there were so enthusiastic that she was invited back to London every year until the outbreak of World War II, celebrating unforgettable triumphs as Eva and Pamina. In 1919, in the early days of the Weimar Republic, Dux had a falling out with the new director of the Berlin opera. For some time afterwards, given her preference for the music of the Romantic period, she was heard practically only in lieder recitals. In 1920 she tried her hand at operetta, singing in Kálmán’s Hollandweibchen, but she was not a great success. In the following year, Dux accepted engagements at the opera in Chicago and other American houses as well. However, she never received the opportunity to perform at the Met in New York. Her misfortune was unmistakably the First World War, which almost certainly stood in the way of an international career, often creating unfavourable conditions for her guest appearances in America. Following a first marriage to the writer Imperatori, Dux later became the wife of the German actor Hans Albers, who was six years her junior. In Chicago she married the multimillionaire meat-packing magnate Charles Henry Swift. Towards the end of her singing career, she made only occasional appearances in lieder recitals on either side of the Atlantic. After the Second World War, the elderly, elegantly dressed singer was seen in Berlin or Salzburg from time to time. Claire Dux had one of the most exquisite soprano voices of her day: of a purity that was seldom equalled and with such a touching pianissimo that a critic once described it as “liquid sunshine”. The radiance of her delicate timbre and her wonderful phrasing enabled her to sing with unmatched lyricism. She was almost unrivalled as an interpreter of lieder because she had developed a special style for that intimate genre that required the highest expression of passion and depth of feeling. Claire Dux died in Chicago on 8 October 1967. Her recordings were issued by Grammophon, Odeon, Pathé and Brunswick, with the earliest still marked “Köln” (Cologne).