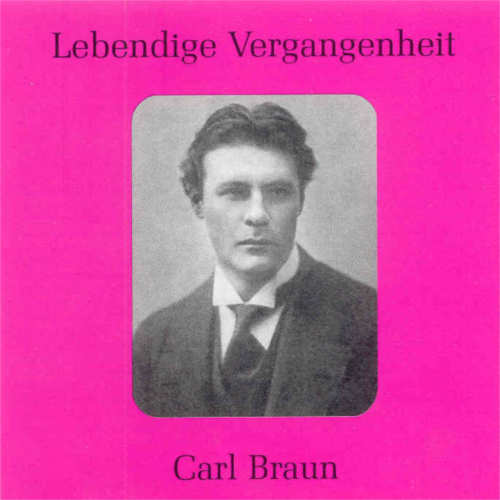 Carl Braun was born at Meisenheim in the Rhineland on 2 June 1886. At the age of 16 he began his vocal studies with Hermann Gausche in Bad Kreuznach. In 1904 he was accepted as a student at the Hofoper in Berlin, where his first role was that of the Hermit in Der Freischütz. In Berlin he continued his training with Eugen Robert-Weiss. From 1906 to 1911 he was engaged at the Hoftheater in Wiesbaden. In the summer of 1906 he sang the role of Fafner in the Bayreuth production of Der Ring des Nibelungen, returning there to sing the same role in 1908 and 1909. In 1911-12 he could be heard at the Hofoper in Vienna, and in 1912 he was called to the newly opened Deutsches Opernhaus in Berlin, where he remained a member until 1915. During his engagement in Wiesbaden he had already made frequent guest appearances in Frankfurt am Main, singing such baritone roles as Jochanaan and Orest, with similar activity at Vienna’s Hofoper in 1908. In 1910 he appeared as a guest with the Wagner Association of Amsterdam as Fafner and as King Henry in Lohengrin. He established a special reputation as a Wagnerian singer, and the Bayreuth Festival regarded him as one of its most loyal and dependable performers. There he sang Gurnemanz in Parsifal in 1909 as well as Pogner in Die Meistersinger and Hagen in Götterdämmerung in 1911. In 1912 he returned for Hagen and Gurnemanz. His next Bayreuth appearances were as Wotan in Der Ring des Nibelungen and Gurnemanz in 1924, Fasolt, Hunding, Hagen and Gurnemanz in 1925, Fasolt, Hunding and Hagen in both 1927 and 1928, Fasolt, Hunding and Gurnemanz in 1930 as well as Fafner and Gurnemanz in 1931. Counting the break between 1912 and 1924, Carl Braun thus appeared at the Bayreuth Festival over a period of 25 years, a record that is unmatched by any other singer. From 1912 to 1917 he was a member of New York’s Metropolitan Opera (debut role: King Mark in Tristan und Isolde). In addition to his Wagnerian roles at the Met (Wotan, Pogner, King Henry), he sang Sarastro in Die Zauberflöte, Marcel in Les Huguenots and Thoas in Gluck’s Iphigénie en Tauride. In all, he appeared there in 15 roles. When the United States entered World War One, he was interned and was unable to return to Germany until 1919. The departure of Michael Bohnen and Paul Knüpfer from the Berlin Staatsoper initially resulted in the engagement of the bass Otto Helgers, but in 1920 Max von Schillings hired Carl Braun to sing the heroic roles. He remained there until 1927. During this period he also made extended tours that took him to Rio de Janeiro and the Teatro Colón in Buenos Aires. There he participated in the first complete Ring cycle, singing the roles of Fasolt, Hunding and Hagen. In 1929-31 he toured North America, singing King Mark and Wotan with the German Opera that had been founded by Johanna Gadski. In 1933 he was called to the Deutsches Opernhaus in Berlin as singer and director. An important stage in Braun’s career was his participation in the festival at Zoppot (today Sopot in northern Poland). There he sang Hagen in 1927, the Hermit in Der Freischütz in 1930, Hunding and Hagen in 1931 as well as Rocco in Fidelio and the Landgrave in Tannhäuser in 1933. In 1935-36 he worked as director at Berlin’s Volksoper and the Stadttheater in Danzig (now Gda´nsk, Poland). In 1937 he moved to Oberhausen, where he worked as a concert agent, and in 1949 to Hamburg, where he died on 24 April 1960. His recording career began in 1911 with the Odeon label and ended in 1923 with Vox, and most of his recordings remained in the catalogues until the end of the acoustic era. Among Carl Braun’s claims to fame was the fact that he was the first singer to record Wotan’s narrative from Act 2 of Die Walküre.