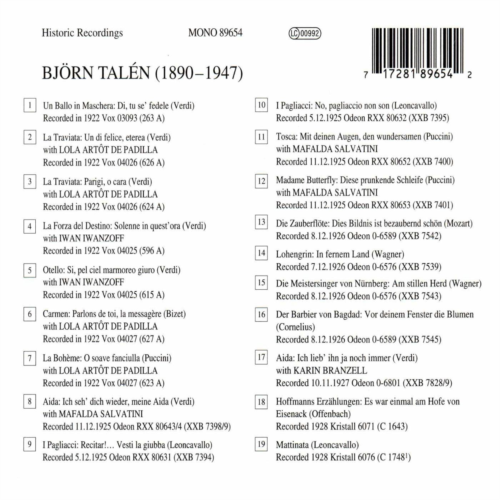 The successful careers of Scandinavian singers on the international opera stage are usually based on roles from the works of Richard Wagner. At times, the Wotans, Siegfrieds and Brünnhildes from Sweden, Norway and Denmark have even dominated the large opera houses of both the Old and New Worlds. But Scandinavians who specialise in Italian bel canto have been a rarity; even the singers who expanded their repertoire of Wagnerian roles with those of the Italian opera have been known primarily as Wagnerian singers. The singer Jussi Björling, who was admired particularly for his French and Italian roles, was a great exception. One of the Scandinavian tenors who was heard between the two World Wars on the German opera stage, especially north of the Main River, was the Norwegian Björn Talén. He was born on 8 November 1890 in Kristiania, today Oslo. In keeping with family tradition, he first attended the officers’ academy in the Norwegian capital and became a lieutenant in the Norwegian army. In the early 20th century he was an officer of the Royal Guards, but around 1910 he began to study voice, first in his hometown and later in Milan and Rome. In 1914 and 1915 he was a pupil of the well-known teacher Sebastianini in Naples. In 1915 he made his debut in Kristiania and sang in Norway until 1920. In 1921 he went to Germany to continue his studies and was hired by the Berlin Staatsoper in 1922 . His initial roles, however, were not dramatic and Wagnerian but exclusively those of the lyric German and Italian repertoire. His first premiere in Berlin was on 27 February 1922, when he sang Nurreddin in a new production of Der Barbier von Bagdad by Peter Cornelius. His partners were Carl Braun as Abul Hassan, Emmy Bettendorf as Margiana and Karl Armster as the Kalif. During his seven years at the Berlin Staatsoper, Talén became one of the most individual and interesting tenors of the institution. Although the colour and timbre of his voice were more that of a baritone than of a lyric tenor, he was cast in the spirit of the Italian bel canto when the stage situation did not call for dramatic effect. Of particular importance to Talén were the immediacy and effectiveness of the musical theatre. When singing Italian roles, for example, he used his own translations in order to make his interpretation of a role as faithful as possible to the original libretto and retain the exact same note values found in the original. These are principles that can certainly not be taken for granted. One example is the well-known passage from Rodolfo’s aria in La Bohème: “E come vivo - vivo!” In the usual German translation, the second “vivo” is replaced with four syllables “Nun, ich lebe” (now I live). Björn Talén’s version is not literally accurate but in keeping with the original intention: he sings the two syllables “herrlich” (glorious) and thus precisely observes Puccini’s musical intentions. Talén’s independent spirit was not always well received, of course, and it was not always easy to work with him. In 1928 he left the Staatsoper, moving to what was then the Städtische Oper. Increasingly, he also sang Wagnerian roles and made guest appearances with that repertoire in the large cities of Germany, Italy, the Netherlands, Spain and Switzerland as well as in the Scandinavian capitals Copenhagen, Oslo and Stockholm. He left Germany in 1932 for both private and political reasons, returning to his Norwegian hometown, where he died on 12 July 1947. Many interesting records have been preserved of his voice, which with its baritone quality was both powerful and smooth, allowing us a glimpse of the individual and personal manner in which he interpreted his roles.