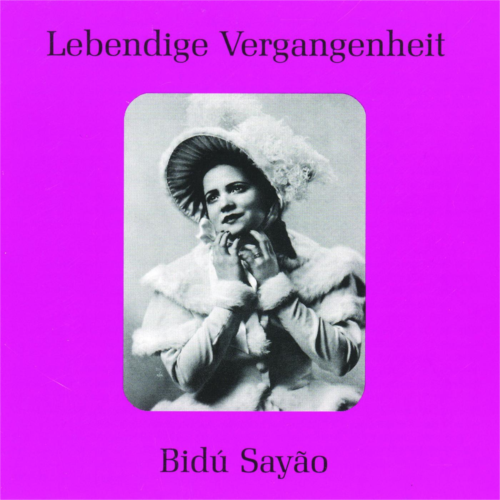 By early 1999, when a scant number of newspapers reported her death, Bidu Sayao was a name only to confirmed opera aficionados - although she had once been legendary, particularly in America. The singer whom Giacomo Lauri Volpi had described as "Brazil's only diva" had ended her stage carteer 47 years earlier. Balduina Sayao de Oliveira was born ön 11 May 1902 to one of the wealthiest families of Niteroi, former capital of the state of Rio de Janeiro. Already in her youth she had dreamt of a career as an actress; in her parents' view, however, this was a rather dubious ambition, something akin to prostitution. Nevertheless, in the end she did make it to the stage - thanks to a sympathetic uncle who balanced his main occupation of public notary with an avocation as concert pianist, and who noticed her vocal gifts early on and guided her to an operatic career. She studied with Elena Theodorini, first in Rio de Janeiro and then, beginning in 1920, at the Bucharest Conservatory, when Theodorini was appointed to the faculty there. Appropriate to her social position, she began her career in 1924 at a gala performance organised by Queen Marie of Romania. After her final studies in Nice with Jean de Reszke, her debut took place in Rome in the Teatro Costanzi on 25 March 1926 in the role of Rosina. The theatre was directed by singer Emma Carelli and her husband Walter Mocchi; Mocchi was also director of the Teatro Colon in Buenos Aires, and became Bidu Sayao's husband after Emma Carelli's death in 1928. Although she had performed in Rio de Janeiro in 1926 and Buenos Aires in 1928, the first years of Sayäo's career were spent mainly in the major opera houses of Italy: in Naples, Rome, Turin and Milan. She gave guest performances in Lisbon and is said to have also appeared in Paris, although her name does not actually appear in the statistics of either the Grand Opera or the Opera Comique. In 1935 she presented an evening of lieder in New York City, and in Rio de Janeiro she appeared in roles such as Rosina, Giulietta, Manon and Gilda. In the following year she met with triumphal success as Cecy in Carlos Gomes' Il Guarany, Brazil's national opera. She then re­ located to America. After performing in a concert conducted by Arturo Toscanini in New York's Carnegie Hall on 13 February 1937, she began her fifteen-year career with the Metropolitan Opera. She made additional guest appearances in Buenos Aires, San Francisco and Chicago, where in 1944 she caused a sensation in La, Traviata when she wore a gown embroidered with diamonds from mines owned by her family. On 23 April 1952, three weeks before her fiftieth birthday, she ended her international career as Manon in the Met's spring tour performance in Boston. She appeared one last time in the US, on 5 February 1954, as Zerlina at the opening of the Lyric Opera of Chicago. Until 1957 she appeared in concerts in Brazil, and during the International Opera Season in Rio de Janeiro in 1958 she gave her farewell concert as Mimf, Melisande and Juliet. From 1947 she lived with her second husband, the Italian baritone Giuseppe Danise, alternating between Rio de Janeiro and New York. After Danise's death in 1963 she moved to Lincolnville, Maine (USA), where she passed away in March 1999. In the annals of operatic history, perhaps more than any other singing actress, she is known for achieving a perfect harmonization in her stage characters between her quality of voice, outward appearance, and personality. Over the course of her entire career, she never attempted to exceed the bounds of her vocal capabilities. Max Lorenz, who held her in high esteem, said that each of her roles became a portrait of her own self. As Olin Downes wrote in the New York Times of her Met debut as Manon in 1937: "This was the voice with the expressive qualities needed for the part. The tone is lovely and fresh and the artist has genuine sensibility. She observed every nuance of expression, and she made the woman real. Manon was more than a pretty eighteenth-century convention. Her sensuousness, her love of show, her fatal and adorable inconsistencies - all were there. The grace of movement, the eloquence of the ,acting, were of interest and significance in every scene. Miss Sayao trium­ phed as a Manon should, by manners, youth and charm, and by the way in which the voice beca­ me the vehicle of dramatic expression. "