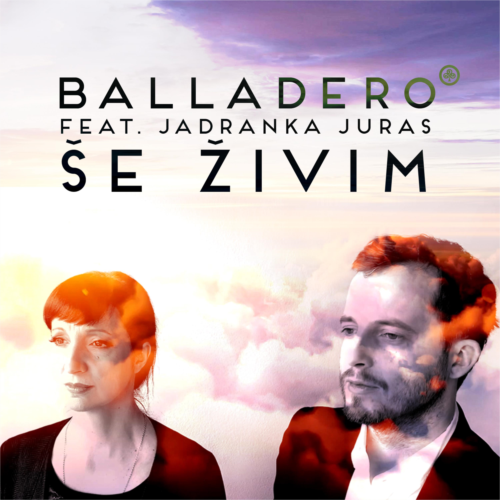 A fresh new duet presents the Slovenian singer songwriter Dominik Bagola Balladero collaborating again with the fascinating Jadranka Juras, one of the most prominent and cross-genre active singers from the region. They have been collaborating since 2012 on the release of their first single Če bi (If only) and have now reunited for a lush orchestral style ballad featuring excellent Slovenian instrumentalists (Kristijan Krajnčan, Robert Jukič, Branko Brezavšček, Urban Zotel, Lana Petrovič, Jože Bogolin), mixed by Miami, USA based producer Bobby MacIntyre, with whom Balladero collaborated for the debut album Club Deuce. The new single Še živim is a unique and carefully crafted piece of music, encompassed with rich orchestral strings and percussion accompaniement and a dynamic full band arrangement. It is a song about the circle of life, depicting the flow of time and the grandeur of the cycles of life with an enchanting musical minimalism slowly building towards a grand instrumental and choral finale. Marking the tragic passing of his father, Jožef Bagola in 2018, the first self produced Balladero song carries a strong importance in the opus of the well versed Slovenian singer and songwriter and is the first released song after the successful release of the acclaimed album Perfect You in 2016 (with producer Uwe Bossert, guitarist of Reamonn) featuring the single Zlati časi, most played song of the year 2016 on Slovenian national radio Val 202.