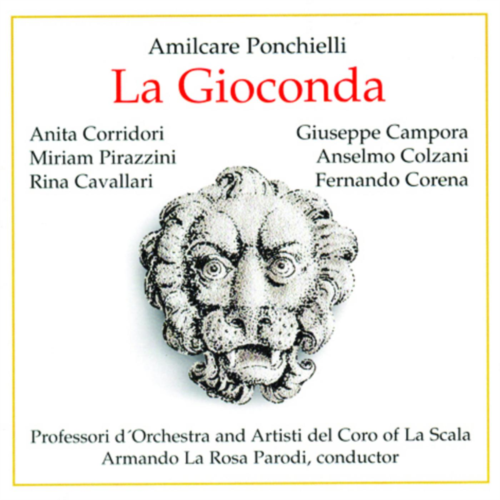 Amilcare Ponchielli was born September 1, 1834, near Cremona. He died in Milan, January 16, 1886. His fame as a composer rests on one work which has achieved world-wide popularity, “La Gioconda”. In Italy he is also remembered as the teacher of Puccini and Mascagni, as a musician who helped inspire and instruct the generation which succeeded him. He was born of a poor family. His mother ran a small general store. His father was a school teacher and organist of the parish church. His talents were obvious when he was a child and his parents recognized them. He was only nine when he was enrolled at the Milan Conservatory where he remained for eleven years. Later in life he was to return there as a professor. His first opera, “I Promessi Sposi”, was inspired by Manzoni’s famous novel, and was produced at the Concordia in Cremona on August 30, 1856. Several operas followed, all forgotten today. The fifth, however, called “I Lituani”, had considerable success when it was presented at La Scala in 1874. “La Gioconda”, his masterpiece, was written to a libretto signed by one “Tobia Gorrio”, otherwise Arrigo Boito, the brilliant composer of the opera “Mefistofele” and author of the libretti of Verdi’s two greatest operas, “Otello” and “Falstaff”. Boito adapted “La Gioconda” from Victor Hugo’s play, “Angelo, The Tyrant of Padua”, a work written in 1835, which also inspired operas of Mercandate, Cesar Cui and Eugen d’Albert. The title, “The Joyous Girl”, belies the wildly melodramatic, gruesome plot. The world premiere took place at La Scala, Milan, April 8, 1876. Despite the fact that it was an immediate success, both with the critics and the public, Ponchielli was not content and worked on the opera for three more years. In 1879 the revised version was performed in Genoa with an expanded finale to the third act. Ponchielli composed several stage works after “la Gioconda” but they are no longer remembered. However, his spectacular Biblical opera, “Il Figluol Prodigo”, had a remarkable success at its Scala premiere in 1880 and, in its time, was considered by some critics superior to “La Gioconda”. His last opera, “Maria Delorme”, was produced at La Scala in 1885. In 1880 Ponchielli took over the Chair of Composition at the Milan Conservatory, a post he held until his death in 1886. The famous composer was a remarkable teacher and was remembered with affection and gratitude by those lucky enough to study under him.