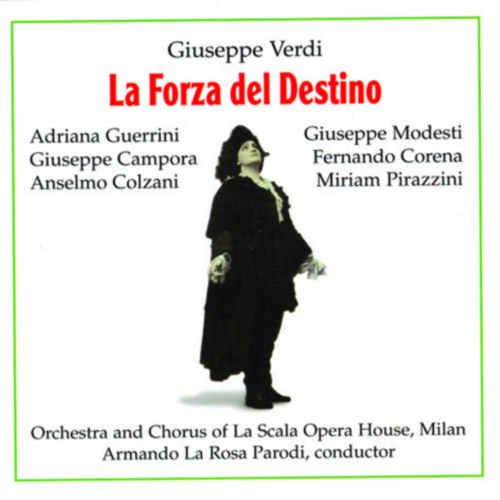 The prototype for the text of Verdi’s opera La Forza del Destino was the drama “Don Alvaro o La Fuerza del Sino” by the Spanish poet Angel Perez de Saavedra, Duke of Rivas, performed in Madrid in 1835. The author, Francesco Maria Piave, following Victor Hugo’s example, did not hesitate to set harrowing episodes one on top of the other in his attempts to bring about the tragic end of two innocent persons. Verdi later, with the help of Ghislanzoni (author of the Aida text), was forced to tone down several spots in Piave’s original. At the same time he added a number of new pieces to the opera. The première of the original work took place in St. Petersburg in 1862, and that of the second version on February 20, 1869, in Milan (La Scala Opera). In spite of the disturbing quality of the drama, Verdi injected into it a warmth that is universally appealing. This is most evident in the music assigned to Leonora, whose part cannot fail to move the listener. To her are given the outstanding sections of the opera – the principal male roles are almost overshadowed by her powerful music. One might say that the work combines sections of varying value, those of primary importance contrasting with those which were more or less written by the “left hand”. An examination of Forza in greater detail will point out the high spots of the work. The overture, composed for the second version of the opera, is one of Verdi’s masterpieces- After three threatening notes by the brass instruments (repeated), which are heard frequently throughout the opera and are meant to signify the call of fate, there starts an exciting theme which is recalled each time Leonora attempts to flee her terrible fate. The brass notes are repeated, and are followed by Don Alvaro’s imploring theme from the fourth act. Then begins Leonora’s call to the Madonna for help, which is heard again in the second act, always with background accompaniment and variations of her “flight motive”. Once again we hear Don Alvaro’s aria; the clarinet, accompanied by harps, then plays Leonora’s theme. The brass instruments return with a festive chorale and the overture ends with a variation of these themes