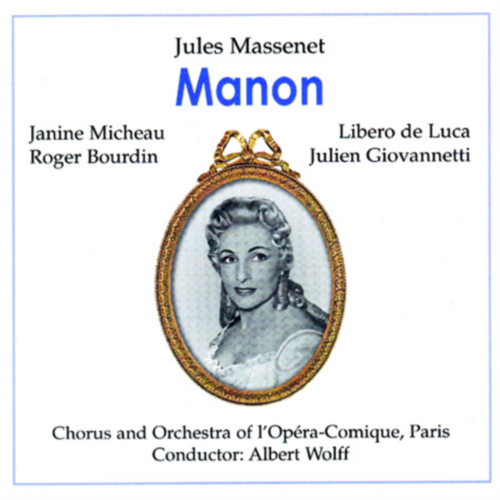 Act I. The Courtyard of an Inn. Manon Lescaut is being taken by her cousin Lescaut to a convent to finish her education. On the way they stop at an inn for the night. Manon is young and exceedingly pretty and the Chevalier Des Grieux falls in love with her at first sight. She is impressed by the young gallant. Lescaut is engaged in gambling with some guardsmen and Des Grieux makes known his passion to Manon. They run off together to Paris in a post-chaise belonging to an old roué, Guillot, who has himself just been making suggestive overtures to the young girl. Act II. The apartment of Manon and Des Grieux in Paris, where Des Grieux and Manon have established themselves. The young man writes to his father asking permission to marry Manon. Meanwhile the unscrupulous Lescaut has decided that it would be more profitable to him were Manon to form a liaison with de Brétigny – a very wealthy admirer of hers, than with the comparatively impecunious Des Grieux. Accordingly he follows them to Paris with de Brétigny. Lescaut confronts the elopers and demands to know if Des Grieux intents to marry Manon. Whilst they converse de Brétigny tells Manon that Des Grieux`s father intends to kidnap his son that very night. If she does not warn her lover de Brétigny suggests that he himself may be able to keep Manon in a state of more elegant luxury. In due course the men arrive to carry off Des Grieux. Manon is temporarily heart-broken. Act III. The Cours de la Reine, Paris. Scene 1. Manon attends a gay féte accompanied by de Brétigny. The Count Des Grieux (father oft he Chevalier) encounters de Brétigny and Manon overhears enough to learn that her beloved Chevalier is to take Holy Orders. She goes off to see her lover at the Seminary of St. Sulpice. The Seminary of St. Sulpice. Scene 2. Though Des Grieux intends to devote himself to the Church the thoughts of Manon still haunt him. When Manon herself appears in the Seminary she soon inveigles him to fly the place with her. He forgives and forgets her past infidelities. Act IV. A Gambling House in Paris. Manon has spent all but a small part of the Chevalier’s money. She brings him to a gambling house and persuades him to try to revive his fortunes. He gambles with amazing and persistent luck. So well, indeed, that one oft he players (no less than that same Guillot whose chaise they borrowed at their first meeting) accuses Des Grieux of cheating. Guillot sends for the pollice. Manon and her lover are arested. Act V. (originally, and sometimes given Scene 2 of ACT IV). On the road to Havre. The Count Des Grieux has had little difficulty in obtaining the release of his son, but Manon has been accused of being a „woman of loose morals,“ and condemned to be deported to the colony of Louisiana. Manon, with a group of low women, passes by on her journey to the port of embarkation. Des Grieux and Lescaut have planned to rescue her from the soldiers, but she is so weak and exhausted by the journey on foot that the plan is unnecessary. She falls by the wayside and dies in Des Grieux’s arms