Famous Basses Of The Past 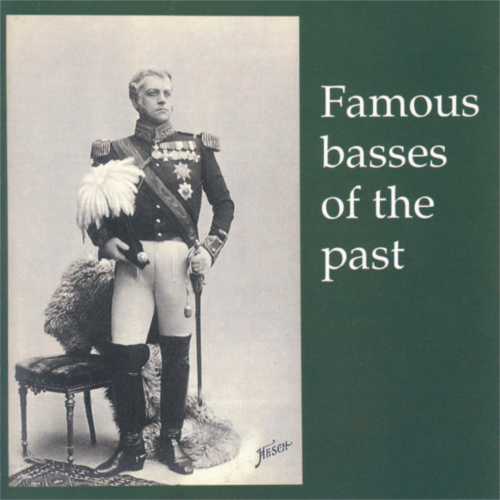 It is an old rule in opera that the three male voices - tenor, baritorie ·and bass - symbolize three stages of life. The bright tenor voice is the embodiment of youth, and that is why the tenor is usually the jeune premier or leading man. The baritone voice, as a rule, is the mark of a more mature stage of life, and very often is assigned to the sombre, "troublesome" figures, the avengers and schemers. The bass voice is customarily associated with age and wisdom. Kings, high priests and other stately characters are usually portrayed in opera by basses. Though these categories may apply in many instances, they do not wholly ericompass the great diversity of the creatures which populate the operatic cosmos. Within the bass realm itself there is a virtually boundless variety of tragic and comic roles, and the so-called character parts. Villians, too, are found in the bass region, including the nastiest of them all, Satan, who is encountered in the most varied guises as an operatic figure.1 Since the earliest days of opera, important functions have been assigned to the bass voice; one need only think of the very low tessitura of Seneca in Monteverdi's "L'incoronazione di Poppea". Indeed, for long operatic epochs the bass had a much higher rank than the tenor, who only rose to his leading position with the demise of the art of the castrato. In times past, the great singers were a contributory factor in the evolution of opera. Mozart, for example, wrote the part of Osmin in "The Abduction from the Seraglio" expressly to suit the phenomenal bass Karl Ludwig Fischer, whose voice had a range extending from low C to high A. And from the early 19th century, too, we know the names of great. basses who served opera composers as models: Filippo Galli, for whom Rossini wrote no fewer than eight roles; Luigi Lablache (the first "Don Pasquale"); Carlo Porto (the first interpreter of Verdi's Attila); Nicolas Lavasseur (Bertram in "Robert le Diable", Marcel in "The Hugenots", Cardinal Brogni in "La Juive"); Heinrich Blume (Werber's first Kaspar); Joseph Staudigl, the original "Waffenschmied" in Lortzing's opera. Obviously, we have no acoustic documents for these singers and must therefore make do with descriptions of their singing. What we do have, however, are the parts. written for them, and these give us a very good idea of their artistry. Now and then, there is also a bridge between the pre-acoustical epoch and the era for which acoustical documentation exists. Gilbert Duprez, for example, was one of the most famous singers between 1830 and 1850. Rossini, Donizetti, Berlioz and Meyerbeer wrote big roles for him, and he is generally considered to be the first tenor who sang a high C with chest voice in brilliant forte. Among his pupils was the French bass Pol Placon, one of the outstanding basses of early recording history, along with the Polish-born Edouard de Reszke, the Frenchman Hyppolite Belhomme and the Italian Francesco Navarini. In the virtuoso singing of these artists there is a vestige of the high vocal culture that was a distinguishing feature of the 19th century. In the later recordings, namely those from the electric era, one can already notice a change to a more realistic manner which aims not so much at refinement of rendition as at natural expression. Many basses from the early days of the gramophone record are linked with the performance history of famous operas. Navarini sang the role of Lodovico in the world premiere ..of Verdi 's "Otello"; the Bohemian-born Viennese opera singer Wilhelm Resch was the first to give Kezal in Smetana's "Bartered Bride" his entree into the world of opera; his successor, Richard Mayr from Salzburg, was the first Barak in "Die Frau ohne Schatten" by Richard Strauss. Many of the artists in this collection took part in world premieres of operas by Puccini, Massenet and other composers, many of whom are hardly known today. In choosing the artists for this programme, a major consideration was the broadest possible range of nationalities. The French (Plan on, Belhomme, Journet), Italians (Navarini, De Angelis, Lazzari, Autori, Pinza, Pasero), Germans and Austrians (Resch, Knüpfer, Bender, Mayr, List and Tisch) are joined by singers from America (Rains), Poland (Didur), Sweden (Andresen) and Spain (Mardones, De Segurola) - and of course Russia, the much-mentioned home of great bass voices. Feodor Chaliapin is undoubtedly the most famous name among Russian singers. But Sibiriakov, Mikhailov and the Ukrainian Kipnis also did their part to glorify the Russian bass. To provide a clear time frame, only singers born in the 19th century are included in this historical edition.