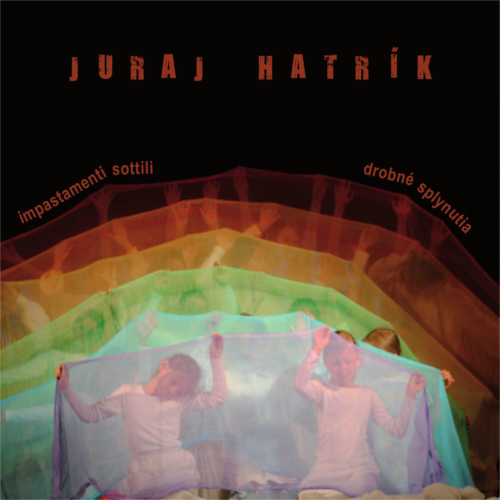 The project collected of different cast chamber pieces „Impastamenti sottili – Delicate Fusions“ opens to a listener a curious imaginative space of musical ideas, impressions, desires, memories, legacies and experiences of the composer Juraj Hatrík, which is possible – Rúfus-like put – to enter more „by heart“ than „by foot“. And as a poet says, this place is childhood land to him, it is not far from composer‘s intention, which is ahead of the auditor. Hatrík, concentrated in a long term on the infantine element present in life as well as arts, offers his partnership with the adulthood and maturity. He observes the nature of child‘s world and seeks the concepts to feel this element in composition, how to capture, embody it. He follows urges of his own core; by the effort to interpret simplified, gestic, symbolic, but at the same moment he reacts on nowadays pragmatism and rationalism, which often conceal or negate real human values. He relies to the power of personal memory, he is touched by its inner subtlety. He pronounces the admiration of the wisdom. He pursues a dialog, a partnership. To an adult he invokes a child, whose joy, energy and naturalness inspires him. He inserts his rich experience with the vim of metaphoric image, with its potential versatility and submerged empathy, into the focus of the very musical structure. That all with the belief, that the Music is the language with universal potential to be accepted, understood. Hatrík does that not by accident; he leans on non-musical inspirations and impulses, which are in his creation permanently present and integrated into musical form. Especia- lly the interconnection of music and word, which is generously applied in this project, guarantees its authenticity resulting from the fact, that in the centre of Hatrík‘s interest is always Human with his Humanity... „And although he is neither historian nor prophet, there is the both in his music, history as well as future“ (V. Godár). Peculiarity, talked out through intimacy of strait expression, brings the essence, which an open-eared listener can merge in, to devote, to understand. With the belief, that a message of a sentient human will be equally valued and universal in every upcoming era... Tatiana Pirníková