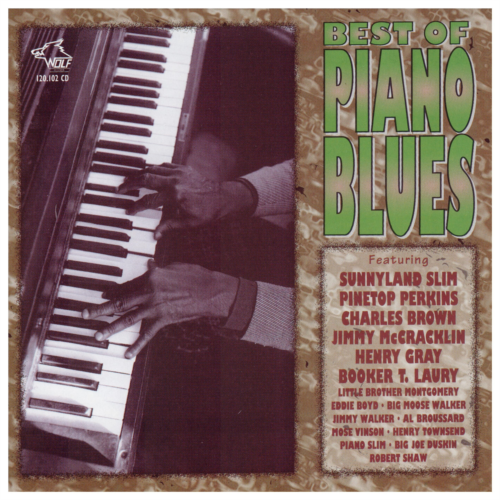 Little Brother Montgomery was one of the most important blues piano players of all time.Sunnyland Slim was an early disciple of Montgomery and learned his bass lines from him.Eddie Boyd had been on the Chicago scene for several years before Muddy came along.Pinetop Perkins spent most of the next fifty years playing piano in the Deep South behind some of the greatest guitarists the blues has ever produced.Big Moose Walker was a great Chicago blues pianist who worked with the legendary Earl Hooker.Jimmy Walker's career dates back to the early 1920s when he was playing house rent parties with Lonnie Johnson and Lee Green among others.Al Broussard one of the true old time masters.Henry Gray has worked as a sideman with numerous bluesmen including Little Waler, Jimmy Rogers, Junior Wells and Jimmy Reed.Mose Vinson and Booker T. Laury: both men have over sixty years experience at the keys, and they display a playing style that reaches back to the early days of barrelhousing.Henry Townsend is a real oddity in the blues world.Piano Slim was born in Texas and spent his early musical years playing the saxophone.Big Joe Duskin hails from Cincinnati, Ohio and continues to carry on the boogie-woogie and blues piano styles he learned during his youth.Robert Shaw was one of the last great barrelhouse pianist in Texas.Charles Brown was trained in a classical style and came up listening to jazz players like Fats Waller and Art Tatum.Jimmy McCracklin is another transparent to the West Coast who has had considerable success in the R&B scene.