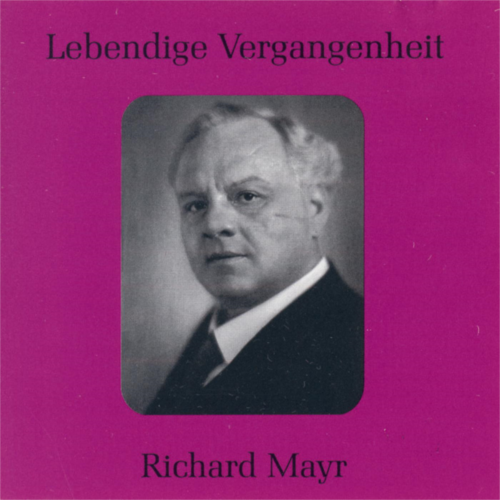 It does not happen too often that a representative of a low register is as popular as the bass, Richard Mayr, is in Vienna. This is the introduction to a short biography in a record-catalogue issued in the twenties. Looking at it now, nothing seems to have changed. Surely, basses, mostly interpreting dignified or comic roles, enjoy the public's respect and esteem; but are rarely object of the public's tumult-like attention like their colleagues with high voices are. When one talks to an opera-goer of an older age group, Richard Mayr's pame will be mentioned unquestioningly and memories will come alive. Richard Mayr was closely connected to the Vienna State Opera and had always been truly devoted do it. Born on October 18th 1877 in Salzburg where he also went to elementary and high school, Richard Mayr came to Vienna in 1897 to study medicine according to his father's wish. Much more than to his medical studies the peasant from Salzburg, who was very fond of singing and whose thirst often was beyond measure, dedicated himself to the gay university-life. Always enjoying company, he spent most of his time in the student's clubs and soon, without even being aware of it, became "a notorious figure in Vienna. His countless participations in artistic performances of Vienna's student clubs, a result of being a member of the Academic Choral Society under the direction of Dr. Josef Neubauer, attracted general attention. Mayr appeared in public for the first time on November 4th 1898 in Vienna's Sophiensaal in a - so called - "Bieroper" by Franz Pawlik:owsky which had the significant title "Dalibor or the Boheme" - pronounced "the Böhm" - and was a parody of the Puccini- and Smetana-fashion in these days. When Hermann Nigg discovered Richard Mayr's obvious artistic personality and took over his vocal training, which later was continued by Johann Ress, all the qualities for a promising career were already existent. On Nigg's recommendation the young student was invited, among others, by the Mens' Choral Society of Bozen to sing the bass-solo in Beethoven's "Missa Solemnis" and to participate in Max Bruch's "Das Lied von der Glocke" in Salzburg. Finally, Mayr gave up his medical studies and started out his singing career on Dr. Neubauer's advice. When Karl Prill heard him in Dvorak's "Requiem" in the Vienna Konzertverein, he recommended Mayr to Cosima Wagner and in autumn of 1901 he was allowed to attend the School for Stylistic Training in Bayreuth which had been founded by Wagner himself. The director, Julius Kniese, took the young singer under his wings and taught him that vocal and acting style that should later become Richard Mayr's most significant characteristic. On July 28th 1902 he appeared for the first time on an opera stage singing Hagen in a performance of the Bayreuth Festival. The surprising success of this young singer led the usually rather laconic Cosima Wagner to make the prophecy: "Mayr, you have been created for the stage!" This successful beginning of a singing career could not escape the attention of Gustav Mahler who was constantly in search of new talents. Soon, Richard Mayr was engaged at the Vienna Court Opera where he made his debut on October 2nd 1902 as Don Silve in Verdi's "Emani". On October 5th he already sang König Heinrich in "Lohengrin" and until the end of his first season no less than 15 other new roles, containing the part of Hagen which he sang on December 23rd 1902 and that of König Marke on February 21st 1903. Finally, one must mention his Leporello whom he sang for the first time on December 21st 1905 and who seemed a proper, rather rustic character, but with his demoniac features had obviously gone through Mahler's school. On December 1st 1905 Richard Mayr was appointed "Kammersänger" which was followed by several other national and international decorations. He became honorary member of the Vienna State Opera on October 6th 1926 andin 1927 received both the title of freeman of Salzburg City and the ring of the Vienna Philharmonie Orchestra. Inspite of his close relationship with the Vienna State Opera he sang a considerable amount of performances abroad. In May 1924 he was invited to London's Covent Garden Opera to interpret Baron Ochs. In later years he also sang König Marke, Pognet, Figaro and Daland in Wagner's "Holländer", a role to which he added unusual and new features. Richard Mayr finally became so popular in London that whatever public locality he went to, he was greeted with the Rosenkavalier-waltz. Paris, among other cities, heard and saw him in May 1928 as Rocco, Leporello, König Marke, Baron Ochs andin Pergolesi's "La serva padrona". He made his debut at New York's Metropolitan Opera on November 2nd 1927 as mastersinger Pogner and added to this success other performances in the United States as Baron Ochs, König Heinrich, Landgraf and Hunding. Being one of Salzburg's greatest sons, there should be no need to explain what the Salzburg Festival ment to Richard Mayr. He was a member of the ensemble from 1921 to 1934 which contributed even more to the almost legendary admiration for this singer's strong personality. Last but not least, one must not forget Mayr's accomplish­ ments as a Lieder and oratorio singer. lt was as a critic wrote: "the sparkling interpretation coming from the rich source of natural talent. When Mayr sings, it is an appeal to mankind from the very bottom of his soul." Since Richard Mayrs death in Vienna on December 1st 1935, the memory of this giant in the world of opera has not lost anything of its liveliness and intensity; it is unrivalled and ever present.