Learn To Chant The Bhagavad Gita 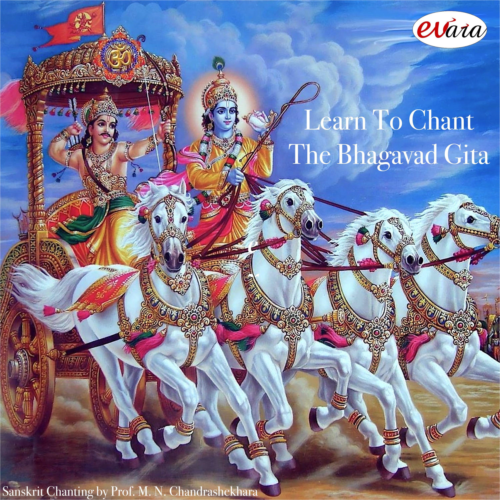 Learn to proficiently chant the Bhagavad Gita with Sanskrit Scholar & Professor M. N. Chandrashekhara. As prescribed in Vedic Chanting, the shloka is chanted once by the teacher and repeated twice by the student. The Bhagavad Gita, often referred to as simply the Gita, is a 700 verse Hindu scripture in Sanskrit that is part of the Hindu epic Mahabharata (chapters 23-40 of the 6th book of Mahabharata). The Gita is set in a narrative framework of a dialogue between Pandava prince Arjuna and his guide and charioteer Lord Krishna. Facing the duty as a warrior to fight the Dharma Yudhha or righteous war between Pandavas and Kauravas, Arjuna is counselled by Lord Krishna to "fulfill his Kshatriya (warrior) duty as a warrior and establish Dharma." Inserted in this appeal to kshatriya dharma (chivalry) is "a dialogue ... between diverging attitudes concerning methods toward the attainment of liberation (moksha)". The Bhagavad Gita was exposed to the world through Sanjaya, who senses and cognises all the events of the battlefield. Sanjaya is Dhritarashtra's advisor and also his charioteer. The Bhagavad Gita presents a synthesis of the concept of Dharma, theistic bhakti, the yogic ideals of moksha[9] through jnana, bhakti, karma, and Raja Yoga (spoken of in the 6th chapter) and Samkhya philosophy. It is Bhagavata explanation of the Purusha Sukta and the Purushamedha Srauta yajna described in the Satapatha Brahmana. Numerous commentaries have been written on the Bhagavad Gita with widely differing views on the essentials. Vedanta commentators read varying relations between Self and Brahman in the text: Advaita Vedanta sees the non-dualism of Atman (soul) and Brahman as its essence, whereas Bhedabheda and Vishishtadvaita see Atman and Brahman as both different and non-different, and Dvaita sees them as different. The setting of the Gita in a battlefield has been interpreted as an allegory for the ethical and moral struggles of the human life. The Bhagavad Gita's call for selfless action inspired many leaders of the Indian independence movement including Bal Gangadhar Tilak and Mahatma Gandhi. Gandhi referred to the Gita as his "spiritual dictionary". Credits:Commentary - Padma Shri Dr. Mathoor Kishnamurti Mangala Shloka - Sri Hosahalli Keshava Murthy Lead Vocals - Prof. M. N. Chandrashekhara Backing Vocals - Sri M. S. Ramesh Avadhani