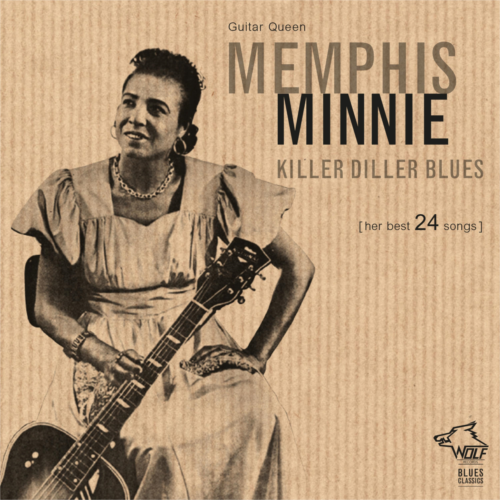 Was born on 3rd June 1897 in Algiers, LA. When she was 7, her family moved to Walls, MS. She got her first guitar when she was 8 and started playing guitar when she was 11. In 1910, she run away from home to live on Beale Street in Memphis. She played on street corners for most of her teenage years.One of Minnies first musical partnerships was with Willie Brown, better known for his friendship to Charlie Patton & Robert Johnson and composer of “Future Blues”. In 1915, she played in the area of Bedford, MS, on ferry boat trips. She mixed Blues and Pop tunes and played also for dances and store promotions. Henry Brown was better known, but Minnie was the better guitarist.In 1929 she married guitar player Joe McCoy. She played with him on a Barbershop on Beale Street when a Columbia scout saw they playing and invited them for a record session in New York. There she recorded her big hit “Bumble Bee Blues”. Minnie and Joe started a series of recording dates in New York, Chicago and Memphis. First for the Columbia Label, later for Decca, Vocalion, Okeh and Bluebird. The interplay on their guitars was like a great conversation. Minnie played on different guitars, on a National in 1929, later she played a electric wood body national and various electric guitars in the 40’s and 50’s. When Minnie came to Chicago, nobody knows how long she can stay there, so the start in 1933 was real great with a contest between her, and the reigning King of Chicago Blues, Big Bill Broonzy. The winner got a bottle of Whiskey and a bottle Gin – this was Minnie with the songs “Me and my Chauffeur” and “Looking the World over”! 1935 Minnie and Kansas Joe divorced and in 1939 she married Little Son Joe Lawlars, a Memphis guitarist. After 1935 Minnie played with piano, drums and horn players and worked for Lester Melrose, a producer and talent scout.In October 1935, the Slide Guitar Player Casey Bill Weldon, backed Minnie on four numbers (on this CD on the song “Doctor, Doctor Blues”). The sound was different in composing to the recordings with Kansas Joe cause of Son Joe’s back-up style. “In my girlish Days” was one of her best songs in this period. Mostly they played at the popular Chicago Club 708, and they recorded for OKeh Records in the 40’s. Minnie became a harder and stronger voice cause the amplified guitar sound. Later in the 40’s, Minnie lived in Indianapolis and Detroit, but returned to Chicago in the early 50’s. The Club owners hired then younger and cheaper artists and also big Blues labels looked for new talents, but Minnie continued to record for smaller Labels like J.O.B or Checker and played in smaller Clubs until 1954.But her health was failing after she and Joe returned to Memphis. Little Son died of heart problems 1961 and Minnie had a stroke, which brought her on a wheelchair and stopped her playing. She died on August 6th 1973 as the “best thing goin´ in the woman line”, Bukka White told. ~Hannes Folterbauer 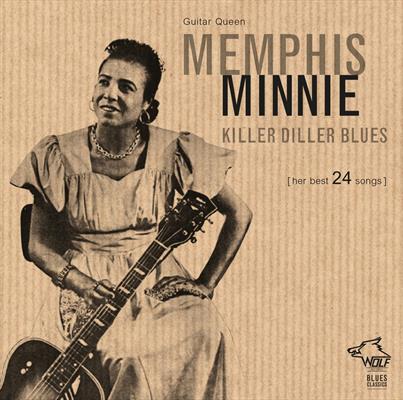