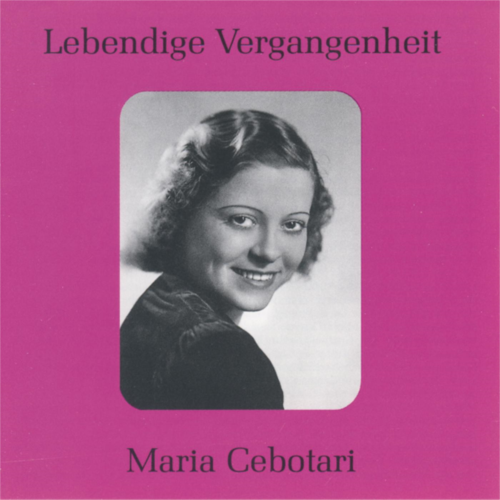 Maria Cebotari, the daughter of a teacher, was born on 10 February 1910 in the city of Kishinev in Bessarabia. Her artistic talent was evident at an early age, as congregations noted every Sunday when her voice was heard from the choir loft of the local church. Art and artists, however, were always regarded with a certain amount of distrust in eastern European middle-class circles, and Maria Cebotari accordingly faced seemingly insurmountable difficulties before she could attend the conservatory in her home town. Her destiny appeared in the person of the Russian actor Alexander Vyrubov, under whose management the Moscow Arts Theatre came on tour to Koshinev. He could not fail to notice Maria Cebotari's great gifts and immediately offered her a contract with his ensemble. lt took all of Vyrubov 's powers of persuasion, which culminated in a proposal of marriage, to make Cebotari's parents give in to his entreaties. She travelled with her husband from city to city, finally landing in Paris, where she again tried to work vocally. Shortly thereafter, while she and her husband were visiting Berlin, her destiny took a new and decisive turn. Through Vyrubov she met Max von Schillings who recommended her to the singing teacher Oscar Daniel. After a very short period of intensive study she was engaged by Fritz Busch for the Dresden State Opera, and under his direction she celebrated her debut on 15 April 1931 as Mimi in Puccini's "La Boheme". In the same year, Bmno Walter engaged her for the role of Amor in Gluck's "Orpheus and Euridice" at the Salzburg Festival. In 1934 Maria Cebotari received the title "Kammersängerin", a distinction reserved for meritorious singers, which had never been, and has never since been, awarded to a 24-year-old. From the start of her career, Maria Cebotari was very active as a touring artist, making guest appearances again and again at opera houses in London, Paris, Milan, Rome, Zurich and many other cities. The Vienna State Opera welcomed the popular artist for the first time in 1936, and she was to remain a member of the company from the end of the war until her death. In 1940 Maria Cebotari was not able to accept an offer from America because her schedule of engagements in Europe was already so füll that she could hardly keep them all. The end of the war, the loss of her hospitable home in Berlin, the forced separation from her family and uncertainty about what was in all respects a dark future left their mark on Maria Cebotari. Nevertheless, in the summer of 1945 she sang her incomparable Konstanze in Mozart's "Abduction from the Seraglio" at the Salzburg Festival, with as tumultuous a reception as ever. In the ensuing years Cebotari, with her own very special dynamism, placed her great art at the service of reconstruction of international operatic life. She set out on a feverish series of guest appearances which eclipsed anything she had done before. Her artistic powers reached a new climatic point, her voice took on a heretofore unknown intensity of expression, her stage presence and acting intensified, and yet, which few had expected, her personal fate began to cast its first shadows on a brilliant career. Once more, just a few months before her sudden death, Maria Cebotari scored a triumph as Mistress Ford in an exemplary production of Nicolai's "The Merry Wives of Windsor", entrancing a fascinated audience with her waggish humor and scintillating temperament. On 9 June 1949, her countless friends, colleagues and admirers, all those who had come into contact with her strongly-willed, highly sensitive personality, were forced to bow to the incomprehensible by saying farewell to one of the greatest singers of her time. Maria Cebotari's funeral in Vienna was one of the most imposing demonstrations of love and honor which any deceased artist has ever received. The numbers on this CD are from the beginning of her recording career. A series for Grammophon followed in 1941, and the last were for His Master's Voice after the war. In addition, there are many radio recordings from Berlin, Dresden and Stuttgart.