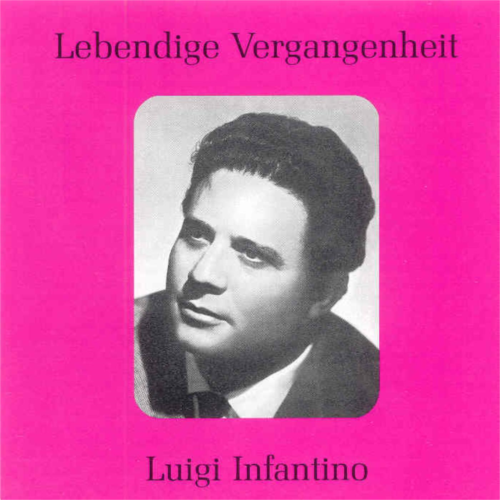 LUIGI INFANTINO. *24 April 1921 Racalmuto †22 June 1991 Rome “The names Caruso and Gigli were on all the posters announcing Luigi Infantino’s concert, but what we heard from this Sicilian tenor had little to do with the performances of those classical singers.” The words of Werner Oehlmann writing in Berlin’s daily Tagesspiegel in 1954. The comparison with those great names had prompted the purist critic to discover a discrepancy between “ambition and performance”. And yet he acknowledged that the tenor, who was 33 at the time, had an “expressive, flexible, round and lyric tenor voice” and a “vocal technique that elegantly shaded his tone”. He constantly characterised and differentiated, his voice sobbed, smiled and flirted in high spirits, and he was emotional and musical like all Italian singers. What Oehlmann found lacking in Infantino’s performance was “the phrasing created by the powerful, smooth breathing of Caruso and Gigli”. Indeed, the propagandistic use of the two great names was neither appropriate nor was it what Infantino would have wanted. Neither Caruso nor Gigli were his models. He was always conscious of the lyric character of his own voice and throughout his entire career he never departed from the roles for which it was suited, which he himself once called the “modern extended form” of a “tenore di grazia”. His idol was the legendary Tito Schipa, whom he tried to emulate in his dignified manner, his controlled yet virtuoso singing style and, especially, in his interpretation of the repertoire. Trained by Italo Brancucci, he sang his debut in 1943 at Teatro Regio in Parma as Mascagni’s L’amico Fritz and as Rodolfo in Puccini’s La Bohème. Beginning in 1945 he sang primarily in Bologna and Naples, singing with the ensemble of Teatro San Carlo in London in 1946 and gaining international recognition as a Rossini tenor. In 1946 he sang his debut at La Scala in Milan as Ramiro in La cenerentola, appearing in the same role at the New York City Center Opera in 1947. In 1948 he sang the role of Count Almaviva in Il barbiere di Siviglia at the Arena in Verona. Among his most celebrated stage roles were Bizet’s Nadir, Mozart’s Belmonte, Tamino and Ferrando as well as Donizetti’s Ernesto, Nemorino and Edgardo. He considered Verdi’s Duke and Alfredo as well as Puccini’s Rodolfo to be roles that were at the boundary of what he should attempt. No one was more surprised than he when Lovro von Matacic chose him for the role of Stolzing in Die Meistersinger von Nürnberg in a 1962 radio recording in Turin. He never agreed to sing this role or similar ones from the youthful “helden” repertoire on stage. Beginning in 1960 he mostly appeared at the Rome Opera, where he added modern roles to his conventional repertoire, sometimes in première performances, singing, for example, the King in Mario Zafred’s Amleto in 1961 and Amnone in Franco Mannino’s La stirpe di Davide in 1962. In 1975 Infantino ended his career, singing the role of the Herold in Ildebrando Pizzetti’s Assassinio nella Cattedrale in Rome. There he died on 22 June 1991, two months after his 70th birthday.