Four German Basses of the Past 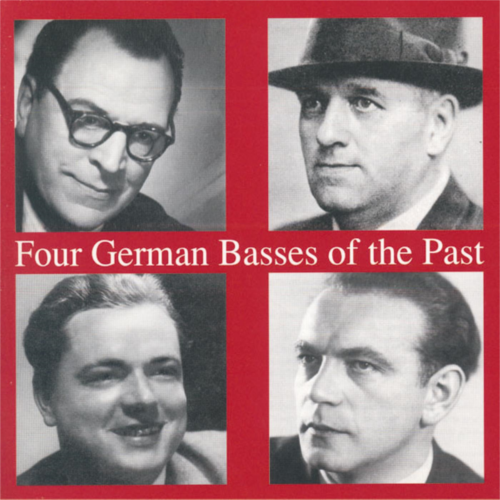 Ludwig Hofmann received his vocal tuition in his native city Frankfurt/Main and Milan. On the outbreak of World War I he was drafted into the army and fought at the front throughout the four years. However, immediately after the war his career as a singer took- wing. He gained his initial stage experience in Bamberg (1918- 1919), Detmold (1919-1920), Bremen (1920-1925), Wiesbaden (1925-1927) and Berlin (1927-1928) where he appeared both at the Städtische Operand the Staatsoper. Henceforth Hofmann was considered to be among the vocal elite and he frequently appeared at the most important opera houses in Germany and abroad. From 1932 to 1939 he was a member of the Metropolitan opera and also appeared at the Covent Garden as well as various Italian opera houses. He was lauded in Bayreuth and at the Salzburg Festival. After World War II he continued his career, frequently also appearing in England and Italy. Shortly before his death he was still singing in Berlin and other German cities. In the course of his exceptionally long career, the multi-facetted artist sang virtually the complete range of the then current hass repertoire. This meant initially various Lortzing, Flotow and Nicolai roles but also included Kaspar in Weber's "Freischütz". Hofmann was, moreover, a noted Mozart singer, his repertoire including Sarastro, Osmin and Figaro. In the latter two roles he was also acclaimed at the Salzburg Festival in 1935 and 1936. His Italian repertoire included the great Verdi roles - viz: King Philipp, Pater Guardiano and Ramphis; His prime role in the French repertoire was Mephisto in Gounod's "Faust". Hellmut Schweebs, born on February 23rd 1897, ,started his stage career at the Theatre of Aschaffenburg (1923-25), then sang in Ulm (1925-27), from 1926 to 1927 at Berlin's Volksoper, from 1927 to 1933 at the Stadttheater in Cottbus and in 1933/34 at the Opera House in Wuppertal. Schweebs signed a contract with the Opera House gf Frankfurt am Main in 1934 where he remained the leading hass until his death and where he took part in various world premieres: on May 22nd 1935 in Werner Egk's "Die Zaubergeige", in Carl Orff's "Carmina Burana" on June 8th 1937, on May 26th 1936 in "Doktor Johannes Faust" by Hermann Reutter and on July 13th 1942 he interpreted the title role in Werner Egk's "Columbus". In 1933/34, already, he appeared at the Teatro Colon in Buenos Aires as Rocco in "Fidelio", as Gurnemanz in "Parsifal" and as Pogner in "Die Meistersinger". A tour with the Ensemble of Frankfurt's Opera House in 1938 brought him to Bucarest, Sofia, Zagreb, Belgrade and Athens. This versatile artist was especially esteemed in roles such as Leporello in "Don Giovanni", Ochs von Lerchenau in "Der Rosen­ kavalier", Kezal in "The Bartered Bride", in the buffo roles of Lortzing's operas but also in the "serious" operatic repertoire. He was a sign1ficant interpreter of Wagner's music as well as a successful concert singer. During a guest performance as Kezal in Bad Nauheim on August 26th 1951 Hellmut Schweebs had a tragic accident on stage and died the same night. The two here presented items are the only commercial recordings of this artist. Wilhelm Schirp was born in Elberfeld on July 27th 1906. He received his vocal training from Arthur Thiele at the Conservatory in Cologne. Schirp's debut took place in 1928 at Cologne's Opera House where the singer remained until 1934. From 1934 to 1935 he was engaged at the Stadttheater Mainz and from 1935 to 1949 at the Deutsches Opernhaus in Berlin which, after 1945, was given back its former name: Städtische Oper Berlin. Schirp was reengaged in Cologne from 1949 to 1952, he was heard in Stuttgart from 1952 to 1956 and, again, in Cologne from 1956 to 1961 where he then also interpreted roles of the heroic baritone repertoire. In 1938 he was heard in the role of Hagen in "Die Götterdämmerung" at London's Covent Garden Opera, in 1938/39 he gave some guest performances at Vienna's State Opera and in 1939 Schirp appeared at the Opera Houses of Antwerp and Brussels. During the Waldfestspiele in Zoppot in 1939 the singer interpreted the part of Landgraf in "Tannhäuser" and took part in the "Ring" cycle. He was Hans Sachs in "Die Meistersinger" in 1950 at the Teatro Liceo in Barcelona, in 1956 the Grand Opera in Paris heard and saw him in "Fidelio" and in 1959 he sang in a guest performance at the Opera House of Graz. Wilhelm Schirp, whose voice has been preserved on recordings by Telefunken as well as on several broadcast recordings, died on December 26th 1974 in Bad Aibling. Josef Greindl's "early" recordings, he started to record only at the age of 30, already indicate the international career which later was to follow. Born on December 23rd 1912 in Munich, Greindl studied at the Music Academy in Munich with Paul Bender andAnna Bahr-Mildenburg. He debuted in 1936 at the Stadttheater in Krefeld in the role of Hunding in "Die Walküre". From 1938 to 1942 he sang at Düsseldorf's Opera House, in 1942 Heinz Tietjen brought him to the State Opera of Berlin where Greindl remained until 1948. The singer's great model was Josef von Manowarda who was engaged in Berlin, too, and whose devoted admirer Greindl had been. When Manowarda - at this time already a sick man - died on Greindl's 30th birth­ day the latter considered it his duty to become the successor of his big idol. In 1943, already, he appeared for the first time at Bayreuth as Pogner in "Die Meistersinger". In 1948 the artist was engaged at the Städtische Oper Berlin and at the same time became a member of Vienna's State Opera. The rest is history - worldwide success, there was hardly an important opera house in the world where Greindl had not appeared. Josef Greindl also was a regular performer on concert stage.