Four Famous Sopranos of the Past 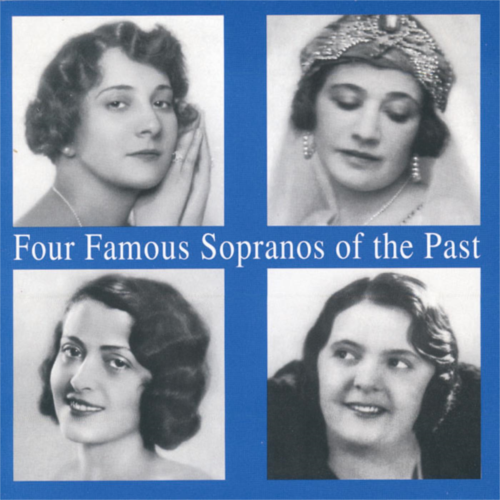 Lotte Schöne was born on Decernber 15th 1891 in Vienna where, at the age of 14, she began to study singing with Johannes Ress and later continued her vocal studies with Luise- Ress and Maria Brossernent. She made her stage debut in 1912 at the Vienna Volksoper as bridesrnaid in "Der Freischütz" and in 1917 was offered a contract by Vienna's Court Opera, later called State Opera, where the singer enjoyed great popularity until 1926, when Schöne was invited by Bruno Walter to perform at the Städtische Oper, Berlin. Her repertory in Vienna mainly consisted of roles from the soubrette repertoire whereas in Berlin she was cast as Mirni, Parnina, Melisande, Liu and Butterfly. Lotte Schöne was London's first Liu and became France's favorite personification of Melisande. Due to her Jewish origins the soprano had to leave Germany in 1933 and subsequently was engaged at the Opera Cornique in Paris. She also appeared at the Grand Opera and undertook concert tours in France, Belgiurn, the Netherlands and Switzerland. When France was occupied by German troups in 1940 Schöne had to take refuge in a small village in the French alps where she kept hiding during the following years. In 1945 the singer resumed her career but from that point on almost exclusively appeared in concerts. Schöne performed one last time at the Städtische Oper, Berlin in 1948 before she definitively retired in 1953. Lotte Schöne settled as a singing pedagogue in Paris where she died on December 22nd 1977. Like Lotte Schöne, Fritzi Jokl was born in Vienna on March 23rd 1895. She studied with Mrs. Rosenthal-Ranner and made her debut in 1917 at the Opera House of Frankfurt am Main where she continued to appear regularly until 1922. Engagements at the Landestheater of Darmstadt (1922-23), the Volksoper of Berlin (1923-25) and at Cologne's Opera House (1925-26) were to follow. In 1926 the artist was heard for the first time at Munich's State Opera where she was especially admired for her Mozart-interpretations. Jokl made guest appearances at London's Covent Garden .Opera as well as at Vienna's State Opera. In 1932 the artist was supposed to fulfil a contract with Otto Klemperer at Berlin's Kroll Opera but the political changes in Germany made this engagement impossible for her. Inspite of her being Jewish, Jokl was still able to perform in certain German theatres in front of Jewish audiences until 1936. When this, too, had become impossible she finally decided to emigrate to America but, unfortunately, was not able to continue her career there. Fritzi Jokl died in New York on October 15th 1974. Tue virtuous coloratura-soubrette Irene Eisinger was born on December 8th 1908 in Kosel (Schlesien) and was trained by her teacher, Paula Mark­ Neusser, in Berlin. In 1926 she made her stage debut at the Stadttheater of Basle and came to the Kroll Opera in 1928 becoming one of its most popular and acclaimed. ensemble-members. Eisinger gained international recognition through guest appearances at Vienna's .·State Opera and, even more so, through performances at the Salzburg Festival where she was engaged regularly by Bruno Walter and Clemens Krauss in the years from 1930-33. After Eisinger's debut at the State Opera in Berlin in 1932 she had to leave Germany, being Jewish, already in 1933. The singer performed at the Deutsches Theater in Prague 'between 1933 and 1937. First contacts with England had been made in 1934 on the occasion of the opening of Glyndebourne's Mozart Festival where she could be heard regularly between 1934 and 1939. Irene Eisinger's Covent Garden debut took place in December 1936 in the role of Gretel in "Hänsel und Gretel". The role of Adele in "Die Fledermaus" became a personal triumph for her. Strangely­ enough, the soprano was not offered any further roles by the management of Covent Garden but was frequently heard in broadcast concerts; long after World War II was over Irene Eisinger could still be heard in BBC productions.Very little is known about the short career of the Hungarian coloratura­ soprano: Szab6 Lujza (Luise Szab6). Born in Budapest in 1904 she studied at the local Music Academy and made her debut in 1927 at the National Opera House in Budapest. She caused quite a sensation as Queen of the Night in "Die Zauberflöte" at the Städtische Oper, Berlin in 1931 under the baton of Bruno Walter. Szab6 also interpreted this role in the same year in Amsterdam as well as for German Broadcast. In Hungary the soprano recorded her Hungarian repertory for HMV, in Berlin she did 12 titles in German for "Ultraphon ' - some of the latter ones have also been published under the Austrian label "Kalliope". Before Luise Szab6's career had even reached its zenith the singer died during an operation in Budapest on November 19th 1934. There was no family relationship with the soprano Ilonka Szabó.