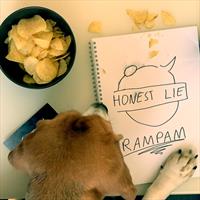 HONEST LIE brings back the good old days of pop-punk with a fiery mix of fun sounding songs and a stone-cold view on society. Their first single “Rampam” will be out on August 21st on Between Music.“Rampam” was one of the first HONEST LIE songs ever. It was written in 2009 and is kind of an HONEST LIE anthem now. The background of the simple title and lyrics (“rampam” is a fantasy-word and came from humming along with the guitar riff) is a hidden message: “Sometimes you just have to do things that you feel right with and stop listening to others. Actually, that’s what HONEST LIE is all about: contrast!”, explains singer and guitarist Phil J. Liar. Like an “honest lie” or “Rampam” – a seemingly superficial lyric with a strong message.